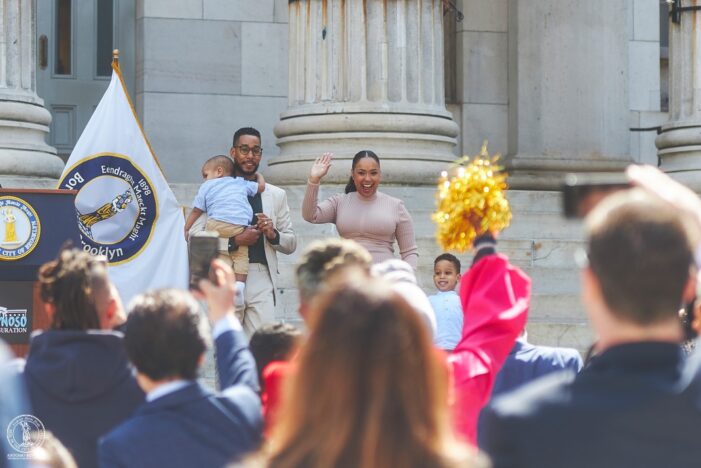 “It’s an honor of a lifetime to not only serve as the Borough President for the greatest place in the world, Brooklyn, but also to bear the responsibility of its future,” said Brooklyn Borough President Antonio Reynoso. “There is work to do in order to preserve Brooklyn’s culture and heritage, make it a safer, more livable place to raise families, and allow individuals to reach their definition of the American dream, but I’m confident that the team we’ve built will accomplish this and much more. Thank you to everyone who’s supported me and who will continue to fight with us for a stronger Brooklyn.”

Elected as the first Latino Brooklyn Borough President, Antonio Reynoso is a native Brooklynite, born and raised in the Southside of Williamsburg, Los Sures, to parents who emigrated from the Dominican Republic.

As a member of the City Council, Reynoso demonstrated his commitment to advocating for the residents he represented, and the thousands more throughout the city with similar needs. He focused his energy on improving the city’s waste-management system, public safety reform, tenants’ rights, transportation, and land-use where he took the lead in advocating for comprehensive planning.

Experiencing and witnessing injustices in multiple facets of everyday life, he has dedicated his career to advocating for bold, progressive legislation citywide that improves the lives of his family, friends, neighbors, and constituents.

Now, Reynoso is serving Brooklyn to make the borough the progressive capital of the world by building on his extensive record in the City Council. Reynoso’s twin guiding principles throughout his life, have always been the concepts of justice and equity, and he has vowed to fight each and every day to give all Brooklynites the opportunity to thrive and succeed.