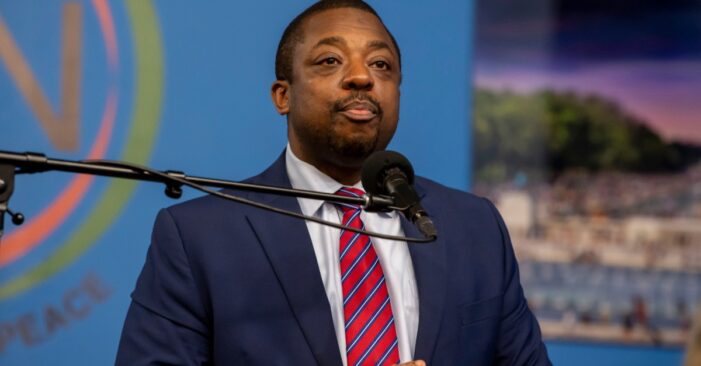 New York will be electing a Governor and Lieutenant Governor come November 2022. Former state senator turned Lieutenant Governor Brian Benjamin is the first New York State Lieutenant Governor of Caribbean descent. In September 2021, he became the second in command to the Governor, Kathy Hochul. A recent discussion with our Editor-in-Chief sheds light on his background, role, vision, and what New Yorkers should expect from his candidacy when elected for a full term. You can listen to the full interview here.

A Snippet on the Early Days of Brian Benjamin
Benjamin is an African American of Caribbean descent, born to a Guyanese mother and a Jamaican father. They came to America as immigrants, worked and raised him and his siblings. “So, my parents are both hardworking union members. They introduced my siblings and me to work hard and be good citizens.”

He was fortunate to have a good education by attending a Catholic school K-12 before studying in Ivy League schools like Brown University and Harvard Business School, where he gathered the knowledge and skills to build a better community. “I spent a lot of time focusing on public policy, investing in the community, and building affordable housing.”
His history and experiences fuel his passion for serving New Yorkers as a Lieutenant Governor and Senator before now. According to him, “I try to make sure that I’m an advocate for our community as I do my job. And then, I ensure that everyone has a seat at the table. I bring that vantage point of someone who spent time in Guyana, Jamaica, and the Caribbean. I bring that to my job. And I think that’s an important part of my identity, and it influences the policy that I help to enact.”

Explaining the Role of Lieutenant Governor
The role of Lieutenant Governor of New York is supposedly a prestigious and well-paid position in the Country. They cover three primary duties under the New York Constitution: to serve as President of the New York State Senate; secondly, to serve as acting Governor in the absence of the Governor from the state or the Governor’s disability, or to become the substantive Governor in the event of the sitting-Governor’s death, resignation, or impeachment. He intends to go beyond that to advocate for the Governor and the people of New York. “I think it’s a combination,” he says, “you’re a partner with the governor and advocate for the people.” He explained that he also prepares for additional roles by working with others as opportunities arise. “I spend time with the commissioners, learning about our key agencies, dealing with some of our important issues. The Governor gives me significant issues to deal handle. And that’s part of how you learn how to prepare.”

Bail Reform, Fairness and Hope to the Minority Communities
Being a strong advocate for criminal justice, Lt. Gov. Benjamin believes strongly in promoting public safety, which he deems the main job of the executive leaders. “So first, the number one job of our leaders and our executive leaders, mayor, governor, lieutenant governor, is to keep everyone safe.”

He shared three main strategies deployed in dealing with the issues, namely:

Concerning workforce development and economic opportunities, he believes that youths need to be equipped with the necessary skill set to become productive in the community. “When our young kids in poverty and poor situations are given these jobs on the streets. How are we investing in jobs, investing in their skill set, investing in the poor, and hiring young people so that they have alternatives?”

On the issue of homelessness and housing problems, which he identified as a genuine concern, he strongly believes in the need to invest in a long-term solution and not a temporary measure. “We have people who are suffering out there. And we have to invest in not just temporary shelters. We need permanent supportive housing. We’re spending a lot of money in our budget to do that.”

Overall, Lt. Gov Benjamin considers the issues complex and multidimensional.
When questioned on the plan to give judges more flexibility with setting the bail reform, he explained that Governor Kathy Hochul is presently working with the legislature. Specifically, to address some of the challenges while maintaining the overall objective of promoting public safety. “The Governor wants a comprehensive plan around public safety, where we address the root causes. And there’s a lot of attention centered around bail reform. Because we want less need for law enforcement and less incarceration, we can only do that if we invest in those key factors,” he stressed.

As part of the strategy, a new office is in place to oversee gun violence prevention with the necessary support. “We have to focus on social media. We have to focus on investing in intelligence analysts who can help us deal with some preventive work that will help us get there.”

Plans for tackling inequity in healthcare
Moving on to discuss the issue of healthcare, it is no longer news that New York’s healthcare system fails minorities, evidenced by the poor health care services they receive and the high incidence of diseases among them. As part of the plan to address the inequity, Benjamin revealed that they are investing in the healthcare workforce, which is paramount. In his words, “It is one of the reasons we are looking at our budget to invest $10 billion in the health care workforce.”
Additionally, “We understand that the hospital workers, the home health aides, many of whom are people of color and some are Caribbean-Americans.”
According to Benjamin, some proposed solutions include “Bonuses, increasing wages, hiring more people. It’s an investment worth over $10 billion in the next five years. Because we believe there’s nothing more important than giving people the respect they deserve and paying them accordingly.”

Education and Public Schools in New York
The discussions explored his views on tackling segregation in New York schools and parents’ concerns over their children’s education. The Lieutenant Governor views the situation as critical. He said, “My biggest concern is that I want to make sure there are quality educational options and opportunities for people in every single community.”
On the issue of ‘open enrollment’ as a solution to the segregated school system in New York, he emphasized the role of choice, specifically allowing parents to have the option to choose schools that meet their children’s unique needs. He said, “I am a firm believer that choice matters. I think parents should have a choice. And I believe parents should not be obligated to choose schools that don’t work for their children.”

Politics in New York
Ahead of the party primaries on June 28, there is interest by strong candidates like the former Governor of New York, Andrew Cuomo. When asked what their strategy will be to keep their present position, he responded that they plan to focus on doing a good job and delivering on the expectations of New Yorkers.
Notably, they intend to deliver by ensuring adequate financial provisions in the budget, which will focus on housing support for citizens in dire need, healthcare and hospital workers, and financial support to clean up the environment.
Benjamin says, “We have a budget due April 1. We are working aggressively to ensure that we have our public safety plan in this budget. We have $25 billion for affordable housing in this budget. Several of which are supportive housing for those who need it. We are making sure that we have $10 billion for our healthcare workers and hospital workers. We will spend billions of dollars to help clean up our environment.”
He added, “Meanwhile, we will be creating jobs and building a new workforce that is representative of the diversity within the community. We believe that good governance leads to good politics by doing that and doing our jobs. And so, we have to focus on that.”

Reasons to vote for Brian Benjamin as Lieutenant Governor
Lt. Gov. Brian Benjamin’s focus and dedication to keeping New Yorkers safe and improving their lives by building affordable housing is a significant fact to consider. He believes that “People need to know that they can go to work and live and that the government is trying to keep them safe.”
Furthermore, his dedication to promoting economic development is one reason to consider him for a second term.

“I want to make sure that young people and people in our communities are trained for those jobs. So, public safety, affordable housing, and real economic development with diversity, equity, and inclusion. I want everyone to have a seat at the table, and that is my job in this administration,” he said.