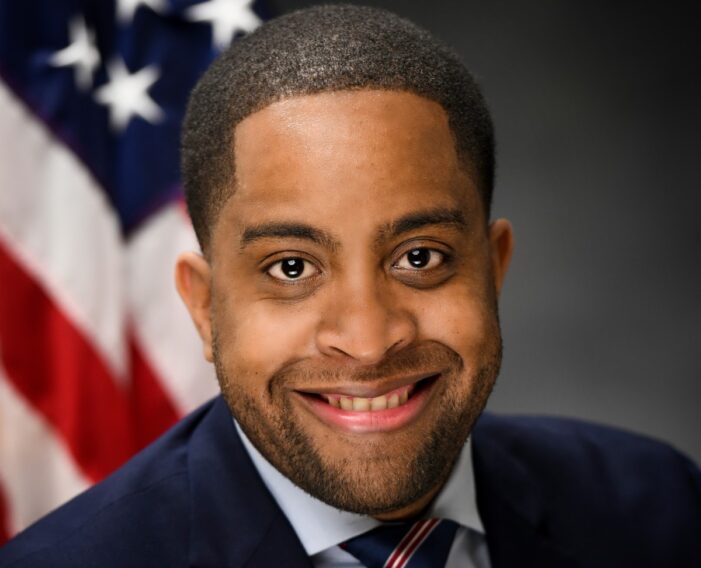 On October 4, Senator Zellnor Myrie was awarded a national leadership honor by the Council of State Government. Our Editor-in-Chief and Host of People, Power & Politics, Pearl Phillip, sat with the State Senator representing the 20th district in Brooklyn, New York, to chat on issues within his constituency and New York City.

Listen to Senator Zellnor Myrie speak on different issues below:

Background
Senator Zellnor, popularly called ‘Z’ by friends, is a Brooklynite born of immigrants from Costa Rica and a proud product of the Central Brooklyn community. “So, I have the privilege to represent the community that made me who I am. The schools that invested in me, hardworking immigrants that provided for me and allowed me to flourish,” he says. “Representing the community in the Senate has been an honor, hopefully for as long as the people will have me.” The Senator also traces his lineage to Jamaica.

Deed Theft in Brooklyn
Within his constituency, the Senator is busy addressing a primary lingering concern that has assailed the community for a long time. The report shows an extended existing fraudulent scheme that has ravaged homeowners since 2014 in Flatbush and Bed-Stuyvesant.

Homeowners have allegedly been targeted by deed theft scheme fraudsters, which legal experts claim are hard to prove and prosecute. However, the Senator and other colleagues, like Senator Brian Kavanagh, on the NYS Senate Standing Committee on Housing Construction and Community Development, are addressing ways to protect vulnerable owners.

The Senator recalls the devastating impact of deed theft by victims in their testimonies during the hearing. “One constituent reached out to me. She was in trouble trying to pay the mortgage. “He recalls, “She reached out to someone who presented themselves as a source of help. That person was a scammer, and she hid it from her family. When she finally told her brother the truth about what happened, her brother had a heart attack right before her and died.”

The victim and numerous other homeless persons shared stories of becoming victims of such schemes. The scammers, he explained, target black communities, immigrants, and older communities. Unfortunately, there is evidence of decades of stolen wealth in equity from the people, with support from the system.

The Senator explained that the courts and the public administrator’s office had upheld the deception and schemes to take black people’s homes. Therefore, the hearing was held to find solutions and gather enough information to turn the action into legislation.
“There has been a systemic effort to push blacks out, he says, to rob us of our wealth, and we have to stand up to it. The corruption must end,” emphasized the Senator.

The Role of New Yorkers in Fighting Deed Theft
The Senator says that providing and informing appropriate bodies remains key to fighting the fraudulent scheme. He encouraged individuals with relevant incidents on home refinancing, the title of ownership, and others to reach out for help from the attorney general’s office, legal experts, or the Senator’s office.

“If you feel you are a victim of deed theft, I encourage you to contact the attorney general’s office – Letitia James. I also encourage folks to reach out to an experienced attorney in the community that also help with this type of legal defense. However, because it’s complicated, they need more resources to help many individuals.”

Several factors, like years of deception, and piles of paperwork, make the cases complicated and resource-intensive. However, it is crucial to reach out as soon as any homeowner suspects trouble.

Delivering Campaign Promises – Affordable Housing, Immigration Reform and Public Education
The constituents of District 20 are both diverse in demographics and economics, and their issues are complex. However, the Senator is abreast of the challenges as a product of the same community.

He shared examples of actions taken to address the various problems. For instance, in housing, – passing the Housing Stability and Tenant Protection Act, prioritizing the needs of homeowners by providing funds during the pandemic to settle bills, and advocating for victims of deed theft.

“Well, in 2019, we passed the Housing Stability and Tenant Protection Act, which was the most progressive rent reform we have made in this state in almost half a century. It protects over 1 million rent-stabilized families living in New York homes. We brought down evictions in this state by nearly 30% after those rent reforms passed,” he revealed.

Senator Myrie says that education has not been adequately funded. “We spend more money incarcerating one individual than we do to educate one child in this state. There is something incredibly wrong with that formula and with that process.” Despite this, they raised over $3 billion between 2019 and 2020 for investment in public schools, which had never happened before.

Yet, he was quick to recognize the struggles facing many over affordable housing and the challenges with the public schools in the state. In his view, settling asylum seekers who arrived in the city over the past months remains a significant challenge due to the crunch in affordable housing. While there are vacant buildings, many people cannot afford to live in them, as well as the ongoing spirited discussions on how schools should be run, who should attend, and others.

Despite the challenges, he feels satisfied with how far he has delivered on some campaign issues.

Reaction to Influx of Migrants, Segregation in Public Schools, and Others
Senator Myrie acknowledged the initial challenges from the unexpected migrant influx into his district. He recalls several school administrators’ expressing concerns over inadequate resources for handling cases of language barriers, no translators, and the inability to provide specialized education. “Senator, we have families just showing up. Many can’t speak the language, but they have a paper that says they’re supposed to be here and that their kid is supposed to be here,” they said with exasperation.

Most of the issues have been addressed. Yet, the Senator laments the unwillingness of some colleagues, mainly Republicans, who are quick at identifying but reluctant to collaborate in fixing the problem. “One thing that bothers me to my core is how Republicans have weaponized immigration but have provided no solutions. Come to the table and let’s get serious about fixing this,” he implored.

In his view, outside the collective effort, it will become a problem to be addressed at the community level.

Still talking about the problems within the public schools of New York, especially the lingering segregated school system, the Senator acknowledged efforts made by School Chancellor David Banks. However, he believes eliminating screenings in the middle school application process is the right approach.
“And I saw that play out a little in District 15. Instead of using these screenings that helped aid the segregation of white kids and kids of color, they dropped those screens. They used other metrics to see who they would let into their schools, and integration happened.”

Overall, parents are happy about the exposure to worldviews and perspectives. “We all should value it,” he says, “It is something we should look at for many of our school districts,” he encouraged.

However, the impact might be short-lived if the Supreme Court overturns affirmative action and rules it unconstitutional. It will lead to the more deep-seated, system-supported disintegration within the schools. “Eventually, someone here is going to say; my kid shouldn’t be in a class with all these other folks. And I have support from the United States Supreme Court, and I’m going to sue,” he warned.

Crime and Politics in New York City
“Crime, unlike other laws and policies that come out of Albany, the City or Washington, D.C., is something that everyone intuitively understands,” says Senator Myrie. Different from other societal ills, crime is complex, and finding the right policy to tackle it is not easy.

However, the Senator is focused on driving down dangerous activity, especially gun violence, in his district. “We have passed several national bills declaring gun violence a public health crisis. We asked the state to spend millions of dollars annually to help hospital and community-based programs prevent and intervene when violence happens. But we also passed a bill holding the gun industry accountable.”

There are ongoing political conversations on how to manage gun violence. Yet, the Senator encourages New Yorkers to pay attention and guard against being politically manipulated.

He also encouraged people to shun the general feelings of lack of motivation towards participating in elections. “So, voters, if the Republicans are trying to take your vote, you cannot let them win. Use your right because someone else is trying to take it away from you,” he said.

The conversation ended with Senator Zeller Myrie expressing gratitude for his family, especially his mother and people that believe in him; an important message as we all look forward to the holiday season.