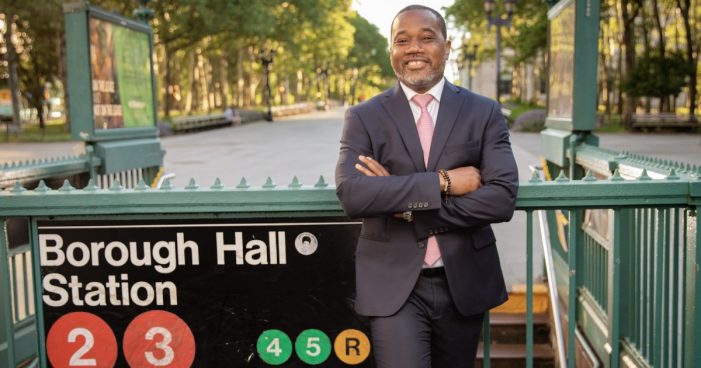 When term-limited Brooklyn Borough President, Eric Adams, announced his run for New York City Mayor, the opportunity opened for democratic hopefuls wanting to replace him when he vacated his seat.  The race for Brooklyn Borough President is crowded, with 14 democratic nominees wishing to assume the position.  While the candidates include a state Assemblymember and three City Council members, most candidates are new to politics and believe they can bring renewed energy to the position.

One such candidate is Brooklyn Community Leader Khari Edwards.  This long-time Brooklyn resident is most known for his role as an administrator at one of New York City’s embattled hospitals – Brookdale Hospital. However, he resigned from his position to actively campaign for the Borough President position. Edwards sees the role of Brooklyn Borough President as a “…connector of the borough.”

He feels the work he did at Brookdale Hospital, connecting the hospital to community-based organizations and forming partnerships, has prepared him to assume the role of Brooklyn Borough President.

Edwards believes he has what it takes to win and feels he would do well in the position.  Although Khari Edwards has never held a political office, he stated during an exclusive interview with People, Power, and Politics Radio Show that he has worked behind the scenes helping local Brooklyn politicians for the past 20 years of his life.  “The years I have spent actually doing the groundwork in the community actually makes me the most experienced candidate,” stated Khari Edwards, who is ready for his time in the spotlight.

Listen to an interview with Khari Edwards on “Running for Brooklyn Borough President” below:

During his time as a community leader, Khari Edwards created several community programs.  He advocated for access to quality and affordable healthcare and housing for African-American and Caribbean people within his Brooklyn neighborhood.

Khari Edwards, a married father of three children born and raised in Brooklyn to immigrant parents from Guyana and Trinidad, loves Brooklyn.  He believes he understands the needs of Brooklyn and plans to lead with a heart for the people. Edwards believes Brooklynites want “Leadership that puts people first.”  Khari Edwards promises to be that kind of a leader.

Although he is well versed in healthcare and housing issues, Khari Edwards is aware that Brooklyn has needs in multiple areas.  Edwards plans to strengthen Brooklyn communities and the lives of all Brooklynites.  He believes that issues around “…housing and homelessness, healthcare, small business, opportunities for youth, and community boards…” need to be addressed.