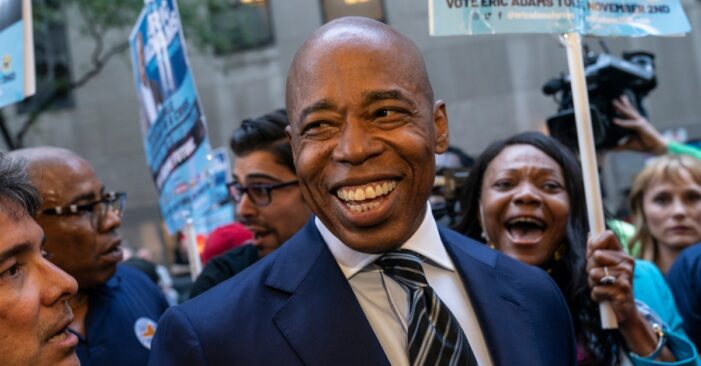 Victorious! Democratic candidate, Eric Adams, won the New York City 2021 mayoral race. When Adams gets sworn into office as the next Mayor of New York City on January 1, 2022, he will be the 2nd African American to hold the position. Since the office of Mayor was established in New York City in 1665, every Mayor has been White. It wasn’t until the late David to the position in 1990 that New York City had a Black Mayor. While Adams didn’t focus on race during his speech, others noted the significance of the city electing its second black Mayor. Camille Doherty, 50, shared, “When I was a senior in high school in 1989, David Dinkins was elected,” Doherty told City Limits. “My daughter is a senior in high school, and Eric Adams is getting elected.” Doherty attended the celebration with her teenage daughter, a dancer who performed with DeVore Dance Center of Hollis, Queens, as part of the night festivities.

Despite the strong victory, the former Brooklyn Borough President, Eric Adams, understands that the road ahead will not be faced without challenges. There are the inherent challenges that come with racial identity and racism in our society and the challenges facing New York City during this Covid-19 pandemic recovery period. Some of the significant challenges facing New York City during recent years, along with the pandemic, have been the loss of jobs and slow return of the economy, increased crime rate and gun violence, the flight of thousands of New Yorkers from the city, and the high cost of living in the city.

During random polls, and as evidenced by New Yorkers’ votes, Eric Adams was determined the candidate most capable of addressing the city’s issues. When early voting in New York City began, Adams had already secured a commanding lead. Early voter polls showed Adams with a 40-point lead over Republican Curtis Sliwa in the race for NYC Mayor. The considerable lead had some persons concerned that voter turnout would be slow because people assumed that their vote was not needed for Eric Adams to win.

During his Brooklyn Marriott victory party, Adams recapped the promises he made on the campaign trail – that he will be a five-borough mayor, serve the underserved, and recover this city from COVID-19. “This campaign was for those who have been betrayed by their government,” Adams said. “I washed dishes. I was beaten by police and sat in a precinct holding cell, certain that my future was already decided. And now, I will be the person in charge of that precinct and every other precinct in the city of New York.” Some of Adams’ supporters, who voted on Election Day 2021, were eager to say why they voted for Eric Adams for New York City Mayor. Ms. Rhoda Basley, CEO of ‘Wanderful Travels, LLC, said, “…his law enforcement background and experience are what New Yorkers need right now.” Ms. Shernell Prescott, CEO of ‘KP Customized Kreationz,’ said, “I voted for him because he already has good relationships with major city and state organizations. He has been a good advocate for the minority community.”

While Mr. Rupert Knights, also known as Brother Rojo, Founder of Powerful Pioneers, and Jerry Kwabena Adinkra, Ghanaian Ambassador in New York City, agreed with the many New Yorkers who were impressed by Adams’ long experience as a public servant. Brother Rojo described Adams as “intelligent, objective, and personable” and believes Adams will humanely address the city’s crime rate. Jerry Kwabena Adinkra stated that Adams’ decades as a Public Servant make him experienced in tackling the city’s issues.” Adams also thanked his supporters and discussed what New Yorkers could expect from him as their next Mayor of New York City. “We are so divided right now, and we’re missing the beauty of our diversity. We have to end all of this division… ,” said Adams. He discussed the need to pull together as “…Team New York.” “I am not creating a division between my firefighters, my police officers, my E.M.T.s, my teachers, my other civil servants. We are all in this together. We will find a way to get through this together. No division, no division,” stressed the mayor-elect. Adams promised to be the voice of all people, “…from every corner and every background in this city. Those who have been left behind and believed they would never catch up – the underserved, marginalized, the abandoned.”

Speaking to NY1 on Wednesday, he said that he was not pleased with the relationship between the city and the state during Mayor Bill de Blasio’s administration. “During the height of COVID, we saw chief executives at each other’s throat. That was not acceptable. It’s not going to happen with me and whoever is in that governor’s chair. I’m going to have a spirit of cooperation,” Adams said. “We are fighting Covid, crime, and economic devastation all at once…We have to turn our economy around by reaching out to the business world to grow the companies we have here while attracting new emerging industries. And we’re going to get the safety we need and the justice we deserve. In four years, this city is never going to be the same. Once we move forward, we will never go back, said Adams. Eric Adams spoke about having hope for a better future, which is a promise New Yorkers hope he can deliver. We have the next four years to tell the story as it remains to be seen.