Friends of all, Satellites of None 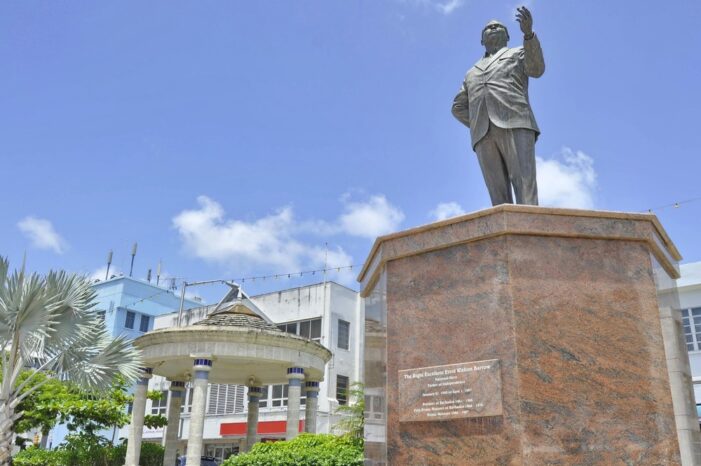 Speaking in 1967 on joining the United Nations, the late Errol Barrow as Prime Minister of Barbados made clear that Barbados and the Caribbean “will be friends of all, satellites on none.” In this his last regular column David Jessop, reflects on a much-changed world and why the region’s young people need to continue to fiercely defend that view.

Middle ranking powers are emerging as important policy arbiters. They are seeking global outcomes that better respond to their own interests as China and the US become the dominant global economic actors, each offering competing approaches to development.

This will not just further reorder the post-cold-war world but will make the Caribbean’s regional and external relationships more fluid and complex, requiring business and governments to develop new thinking about the consequences and where future self-interest lies.

This changing geopolitical order may seem remote from the day to day lives of ordinary people, but as the recent surge in energy and food prices has shown, global politics, ideologically led wars, nationalism, and sanctions can rapidly affect everyone’s lives.

As islands caught in the stream of global political and economic events, Caribbean nations large and small, absent accepting the hegemony of a superpower, will in the coming years need to manage the ever-growing interest of a wide group of nations that see strategic advantage in developing a strong economic presence in the Americas.

So far the region despite its smallness, fragmented nature and vulnerability has largely been able to do so effectively. However, a much wider group of nations including Turkey, Saudi Arabia, Qatar, Brazil, Mexico, India, and Iran through Venezuela, are now showing every sign of wanting to play a greater role in the Caribbean.

Their interest is about more than the region’s sixteen votes at the UN and role in other multilateral fora. Positive investment opportunities in oil, gas, and tourism aside, it now also relates to the influence that may arise from having a presence in nations geographically proximate to the US. It is also about accumulating influence in the Americas as nations become less US centric and more politically assertive about their direction and needs.

All this is happening as CARICOM becomes ever less unified and fractious, other than on overarching issues such as climate change, making future economic deepening with larger Hispanic Caribbean neighbors improbable, and achieving the coherence the word Caribbean suggests unlikely.

All of which increases the region’s political vulnerability and the probability that its international relations will fragment.

The trends are there for all to see.

Underpopulated but increasingly wealthy Suriname and Guyana plus Trinidad with Venezuela are emerging as energy powerhouses for the western hemisphere and are being actively courted by the US, China, and a multitude of other nations. China’s rise and economic profile in the region continues unabated, seemingly with some nations being of greater significance than others. The US is slowly recognising it must speak with a softer voice while seeking to consolidate a multi-faceted special relationship with Jamaica, The Bahamas, the Dominican Republic, and the Guianas. Realpolitik is causing Washington to modify its now largely failed attempt to isolate Venezuela, enabling Caracas to fully restore its PetroCaribe initiative and influence in the Caribbean and Central America. Cuba, as President Diaz Canel’s recent visit to China showed, is prepared to throw it a significant long-term economic lifeline. And Europe continues to care but lacks the interest to do much more than provide development and security support.

Add to this the likely regional investment role of Saudi Arabia, Qatar, India, Turkey, Mexico and Venezuela, and Caribbean nations individually, jointly or in new more complimentary sub-regional groups, will have to determine how to manage the pressures and complexity that new relationships may bring.

A further complicating factor is the real possibility in the coming decade the process of consolidation already underway between some of the region’s biggest enterprises could once again see external corporate acquisition delivering majority overseas ownership of pan-Caribbean companies.

Other less benign equally powerful actors are also at work. They too see the Caribbean geopolitically and seek opportunity. Although rarely spoken about in the same way, the countries of the region, its politicians, security forces, economies, and cyber security, continue to be targeted by globally-linked organized crime networks whose economic reach and social influence potentially pose a far greater threat to sovereignty than any foreign government.

All of which will likely see the Caribbean having not just to ask but to find answers to what this may mean for the region, its future unity and long-term economic development, and more fundamentally, how small nations remain the mistress and master of their own destiny?

What answers there are seem unlikely to be found in greater integration, but through the dogged pursuit of national enlightened self-interest, involving overlapping sub-regional economic groupings working as required with nations from beyond that demonstrate in practical terms the respect an historically put-upon and exploited region requires.

This will likely involve nations having leaders who like Mia Mottley are willing to ask difficult questions about the future rather than holding on to the constructs of the past.

It suggests that the region’s political class need to do much more to seek and identify a realistic path towards the end of the rainbow, act in their national and their near neighbors’ self-interest, having better defined the opportunities and limits posed by physical location, economic dependency, indebtedness, critical mass, financing, smallness, the lack of congruent borders, security, and unresolved transport issues.

The Caribbean has much to offer in relation to its fierce independence, its values, its vibrant forms of democracy, its freedom of expression, culture, and socially oriented identity. Its young people need to be better engaged by Government, business, NGOs, the Churches, and schools at all levels in recognizing this and defending its importance in a world that is rapidly changing.