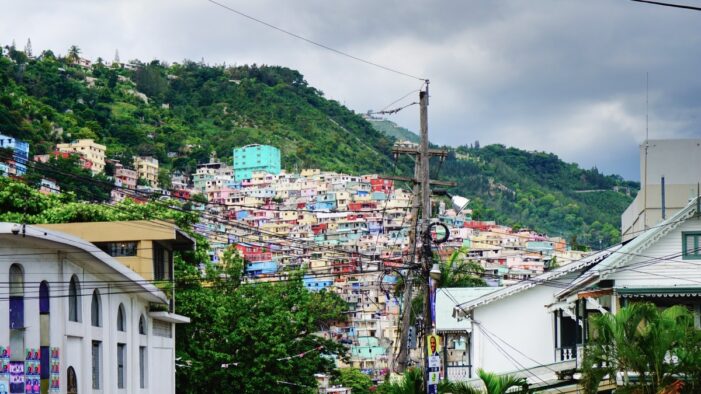 Port-au-Prince, Haiti – 11.01.2015: View of Port au Prince and the Jalousie, an extremely poor district of Pétionville suburb of Port-au-Prince. (Shutterstock)

In addition to being hit hard by the global food and fuel crisis caused by Russia’s invasion of Ukraine, in recent decades, Haitians have been subjected to devastating earthquakes, tropical storms, landslides and flooding, in addition to chronic lawlessness and impunity.

“The situation is spiraling out of control already,” said Jean-Martin Bauer, WFP Haiti Country Director. “Large parts of Port-au-Prince are controlled by gangs; the data we have, show that the situation over the past 90 days has gotten worse…based on what is a very vulnerable place, we already had one million people in this city who were acutely food insecure.”

Speaking via Zoom from Port-au-Prince, Mr. Bauer explained that between 150 and 200 gangs operate there, and that things were getting “worse by the day” for Haitians.

No-go zone
“Since Friday there’s been fighting downtown in the port area, in Cité Soleil, and yesterday in La Saline, places that are very close to the port and also close to where hundreds of thousands of very poor people live.” These included a heavily pregnant woman who had to shelter on the floor of her home for an entire day, for fear of being caught in the crossfire during a prolonged gunfight, the WFP official explained. The next day, just as she was able to leave her house, someone set fire to it. She later gave birth and now lives in a center for displaced people.

Recruited to fight
According to two local youth-focused organizations, 13 per cent of the children surveyed in one troubled neighborhood in Port-au-Prince, had been in contact with members of armed gangs who tried to recruit them. “The context is gang violence, people are not able to work, people are not able to sell their produce and at the same time food prices are increasing,” Mr. Bauer said.

“And, Haiti is an import-dependent country so really at the forefront of what’s going on” – a reference to the fact that the Caribbean island imports 70 per cent of its food needs, and as elsewhere, has suffered from the Ukraine-driven global food and fuel crisis. “Inflation here has been running at 26 per cent,” the WFP official said. “Food inflation has been 52 per cent, this is according to the Haitian Government and the analysis of the food basket they do here.”

Aid solutions
To continue to ensure that the vulnerable Haitians receive assistance outside the capital, WFP has resorted to using sea routes, rather than target-prone trucks. “WFP set up a maritime service to bypass the gangs that are around Port-au Prince, so what we do is we send the trucks to the port, they board a WFP chartered ferry and that vessel goes either to the south or to the north, to ensure that humanitarian aid continues reaching all Haitians, no matter where they are.”

According to WFP, 4.4 million Haitians need immediate food assistance, representing almost half the population. The UN agency has appealed for $39 million to fund its assistance over the next six months.