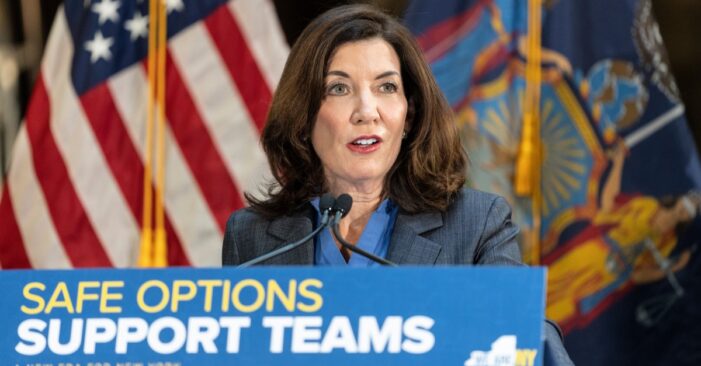 In her State of the State address, Gov. Kathy Hochul promised to end a controversial tax break to incentivize developers to build affordable housing in New York City. The 421-a program will expire this year, so lawmakers simply have to do nothing for it to go away. But Hochul pledged she would replace the program with something else, something she said would better use state dollars to stimulate more affordable housing construction.

Hochul laid out her idea for such a replacement in her executive budget. Absent from her briefing book, she included details of the new program in the Education, Labor and Family Assistant budget bill – an unusual place for housing legislation – buried all the way at the bottom. Dubbed the Affordable Neighborhoods for New Yorkers tax incentive – or the ANNY program – the proposal would create a new 485-w section of the state property tax law, giving housing wonks a new number and letter combination to confuse laymen with.

Despite her promise to replace the existing tax break with something new, Hochul’s proposal serves more as a tweak to what’s already on the books. It keeps the same overall structure and conceit with a few changes to make the affordable units built slightly more affordable. Though applauded by some in the housing sphere, it doesn’t represent the kind of transformational change that housing advocates would like to see, with the plan considered more of the status quo in incentives for big developers.

This is a slight improvement over the existing 421-a program, which allows developers to build affordable units as high as 130% of the area median income, which is $139,620 for a family of three, under all three options it provides to developers. However, it doesn’t provide incentive to build more deeply affordable housing, sticking with the lowest affordability range of 40% of the area median income and only a small percentage of units at that level. “Even 90% AMI, while definitely better than 130%, we would have liked to see more for the affordables who are around 50% AMI or below who are really struggling,” said Debipriya Chatterjee, senior economist at the Community Service Society. “But it’s definitely an improvement for the affordability goals for this program.”

Other changes include the length the units would remain affordable. In option A, they would remain so forever, while option B would provide 35 years of affordability followed by permanent rent stabilization. That favorably compares to the current program, in which affordability lasts only as long as the tax break – 25 years with 10 year phase out for all options open to developers.

However, the 485-w program has left housing activists wanting. Despite the improvements, Hochul’s proposal still approaches affordable housing development the same way as 421-a, with large tax breaks for developers for their entire buildings. “It’s just more of the same,” said Cea Weaver, campaign coordinator for the Housing Justice for All coalition. “It just doesn’t really seem that significant.” She questioned how the state would enforce the permanent affordability Hochul is promising, referring to the inclusion simply as “window dressing” until advocates know more.

Sam Stein, housing policy analyst at the Community Service Society, said the state could limit subsidies to just the affordable units, or abolish the tax break altogether and use what would have been lost revenue to directly finance construction of affordable housing. “But the new version doesn’t do either of these things,” Stein said. “It just adjusts the parameters of the existing program.

Members of the real estate industry don’t seem unhappy with Hochul’s proposed 421-a replacement despite the changes it includes. “The Governor’s proposal provides the private sector with an important tool for producing rental housing at deeper levels of affordability permanently,” Real Estate Board of New York President James Whelan said in a statement. “We look forward to continuing to work with the State and City on long-term solutions to address the housing supply crisis in New York City.” It’s still early days and opinions might change as people dig deeper into the details, but the influential lobby for developers has given Hochul its seal of approval.

And Hochul’s plan has made a good first impression on at least one key lawmaker. “I think she should be commended for coming up with something different,” Assembly Member Steve Cymbrowitz, chair of his chamber’s Housing Committee, told City & State. Although he said he still awaits additional information from the governor’s office to ensure all the math works out, Cymbrowitz said he liked the plan’s commitment to deeper levels of affordability.

This isn’t the first time that the 421-a tax break has gone through some changes. Most recently, former Gov. Andrew Cuomo tweaked the program in 2017 and attempted to rebrand it as Affordable New York. Hochul’s new proposal may have new branding and a new section of law, but it belies the fact that it’s largely the old subsidy with a different name. “The general guidelines of what she said she was going to replace it with sounded like something we could potentially support,” Stein said. “The changes that have been proposed, though, don’t address some of the core problems with 421-a.”