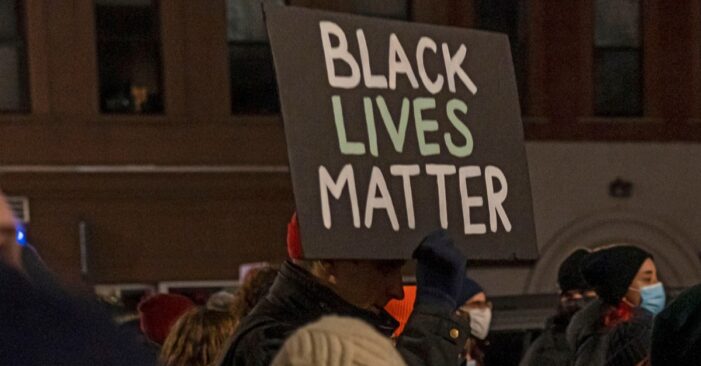 People holding signs march in Brooklyn against the acquittal of Kyle Rittenhouse on November 19, 2021 in New York City. (Shutterstock)

NEW YORK — When asked how his administration would get a handle on an uptick in shootings, Mayor Eric Adams criticized the Black Lives Matter movement Wednesday for failing to mount large-scale protests against ongoing gun violence.

“If Black lives matter, then the thousands of people I saw on the street when [George] Floyd was murdered should be on the streets right now stating that the lives of these Black children that are dying every night matter,” Adams said. “We can’t be hypocrites.”

Adams was speaking on NY1 about the arrest of Frank James, who is accused of carrying out the shooting on a Brooklyn subway car Tuesday, when he was asked about more than a dozen other incidents of gun violence that happened in other parts of the city Tuesday night through Wednesday morning and what he would do to get a handle on crime.

“By being consistent with our message. Here is my question that I put out to the city: I thought Black lives mattered. Where are all those who stated Black lives matter?” he asked in response. “Then go do an analysis of who was killed or shot last night. I was up all night speaking to my commanders in the Bronx and Brooklyn. The victims were Black. Many of the shooters were Black.”

Adams has made crime the signature issue of both his campaign and administration, but is grappling with a dramatic rise in violent incidents since the start of his mayoralty. Major crimes are up 44 percent compared to last year, according to NYPD statistics from earlier this month. And shootings, which had already doubled over 2019, rose another 14 percent over the last year. To make his focus clear, the mayor has traveled to crime scenes across the five boroughs to talk with victims and hold press conferences. However, during the subway attack that’s been the most serious incident of his tenure, he was quarantining in Gracie Mansion after coming down with Covid-19.

“It was very difficult for me not to be at 36th Street and at some of our command centers,” he said during a separate interview Wednesday morning, referring to the station where shooting victims fled a smoke-filled subway car. “But I have to listen to the orders from our healthcare professionals.”

Since winning the general election last year, Adams has clashed with Black Lives Matter of Greater New York and its co-founder, Hawk Newsome, over policing policies. Newsome said in an interview with POLITICO Wednesday that the mayor was attempting to deflect blame after not being able to control violent crime through the police department.

“He wants us to have a fight in the newspapers to distract people from the real issues,” Newsome said. “The mayor is great at press conferences and he is really good at making statements, but he lacks efficiency and the ability to lead our city in a safer direction.”

Newsome said that critics of the Black Lives Matter movement, which rose to global prominence in the wake of George Floyd’s murder at the hands of Minneapolis police, often point to crime committed within the Black community as a larger problem than police misconduct. He said a new organization called Black Opportunities is launching a number of community programs — including de-escalation training and neighborhood patrols — designed to reduce shootings and violence without having to rely on City Hall or the NYPD.

“He called on us to do the job of the elected officials and the police department, who have a collective budget of billions,” Newsome said. “He wants to do this from a grassroots perspective. And on behalf of Black Opportunities: We accept his challenge.”