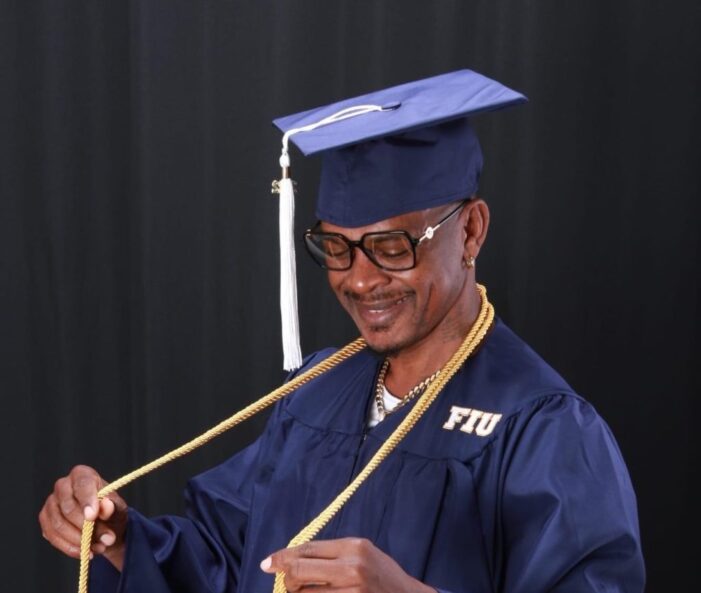 Jamaican dancehall artist Mr. Vegas, 47, who was born Clifford Smith in Kingston in 1974, has graduated from Florida International University (FIU) with a degree in Sociology/Anthropology and a minor in Hospitality Management. During his studies, he maintained a GPA of 3.9. He announced his achievement on Instagram with a post that included a photo of him in his FIU gown.

The dancehall star accompanied the announcement with the story of his journey, which began in 2019 when he decided to re-educate himself and obtained a General Education Diploma, a high school equivalency diploma that he received after taking the General Educational Development Test. Mr. Vegas had not graduated from high school in his youth as he dropped out of school in the ninth grade. He then attended Broward College and earned a degree in Mass Communication in 2021.

He went on to tell his 170,000-plus followers on Instagram that “getting a taste” of college life increased his desire to do more, so he applied and was accepted to FIU. He changed his major to Sociology/Anthropology with a minor in Hospitality Management. The challenges arising from the COVID-19 pandemic and difficult school assignments threatened his achievement, but he kept studying and eventually earned his degree with a 3.9 GPA.

In his Instagram post, Mr. Vegas also thanked all the people who helped him on his way to academic success, especially his nephew and several colleagues who encouraged him throughout his journey. He also thanked his teachers, in particular “Dr. Sammy.”

Mr. Vegas is optimistic about his future, noting that furthering his education has been a great event in his life. He wrote that he will now be an inspiration to his children and that he now wants to share his experiences with others. The singer’s accomplishment has earned him considerable praise from celebrities, including Khadine Hylton, better known as “Miss Kitty.” Etana also congratulated him, as did many of his fans.

Mr. Vegas continued his pursuit of higher education while also being involved in copyright litigation against VP Records in a lawsuit that was filed in 2020. A settlement has recently been reached prior to trial.

The musical resume of Mr. Vegas includes several Billboard-charted songs and a MOBO Award for “Best Reggae Artist.” He is well known in Jamaica for songs like “Nike Air” released in 1997 and among others, “I am Blessed,” “Tek Heh Yuself,” “Party Tun Up,” “Daggering,” as well as collaborations like “Taxi Fare” with Mr. Lexx and “Bad Man Nah Flee” with Beenie Man. The artist’s latest track, “Bhuff,” was released in October 2022.