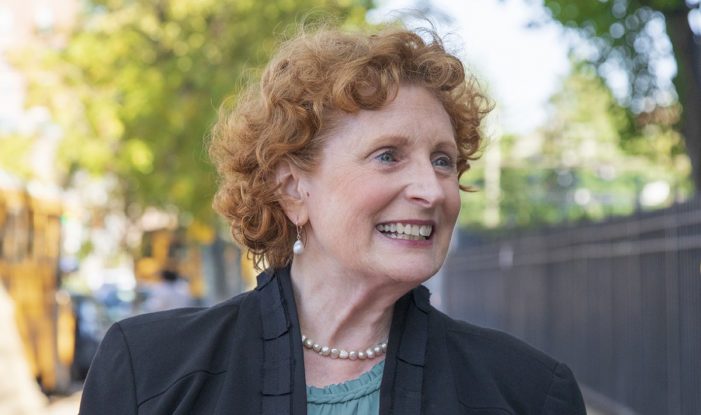 Democratic Assemblywoman Jo Anne Simon is a trailblazer on many counts – if elected, she will be the first female to hold the position of Brooklyn’s Borough President. A qualified Brooklynite, who has lived in the City for almost 40 years, she grew up in Yonkers as the oldest girl in an Italian immigrant family and was the first to attend college.

Simon is an accomplished attorney specializing in disability civil rights and a politician with over 25 years of experience. She has served in various capacities in the borough’s communities focusing on changing the decision-making process in environmental justice issues, increasing access to education, affordable housing, advocating for street safety, and bringing fiscal responsibility to the public agenda.

Community Leader
Assemblymember Jo Anne lives with her partner, and her grandchildren and stepsons live in New York. She graduated from Iona College, has an advanced degree in Education of the Deaf, and earned a law degree from Fordham University School of Law.

She is a recognized expert who has served as a judicial law secretary and taught in Hofstra University School of Law’s clinical program. She is considered an expert in civil rights law for persons with disabilities. Simon considers herself a community activist.

In an exclusive interview with Caribbean American Weekly, Simon stated that “I have been working my entire life to empowering marginalized communities: as a disability civil rights lawyer, community leader, and a former teacher of deaf children, as a leading advocate of people with reading disabilities. So, I believe that my background and ability to work with people across the board is something that I bring to this position in a fundamentally different way than anybody.”

Listen to an interview with Jo Anne Simon on “Running for Brooklyn Borough President” below:

Having served in over 25 positions ranging from the President of the Boerum Hill Association, she has also led various positions in Traffic & Transportation, Land Use, and Atlantic Yards committees. She also served in different capacities as Founder or Co-founder of numerous organizations.

In her interview, Simon emphasized that “I have a long history as a community leader and organizer working with communities primarily through Western Brooklyn on environmental justice issues, transportation, and land-use issue, which all intersect in our everyday life. It’s the intersection that forms our lives and creates some barriers that affect our community, life, health, and education. These are issues I dealt with for a long time as a community person. The borough Presidency is a job that is not hierarchical. It is the Senior Political person in the borough but in reality, what the borough president does is empower communities. They have the power of convening, the power of advocacy, the strategic use of capital dollars and other funding to support goals or social goals to improve people’s lives.”

She considers herself the best candidate for the job because of her ability to work with various stakeholders. She explained that she intends to work with community members collaboratively, allowing different representations around the table.

“What I learned by working with communities is that they want a seat at the table. It is my goal to ensure that people no longer pull up a folding chair. At my table of being the Borough President, there will be a seat for all.”

Issues to be addressed in the first 100 days
In the first 100 days, Simon claims she will focus on recovering from the impact of COVID-19, addressing access to immigration and legal services, and getting a sense of how to manage land use in the borough. She explained, “We need to address those issues, access to immigration services and legal services …too many of our people really have issues that they need the advice and guidance of a lawyer. They don’t have access to that; that is something I will set up.”