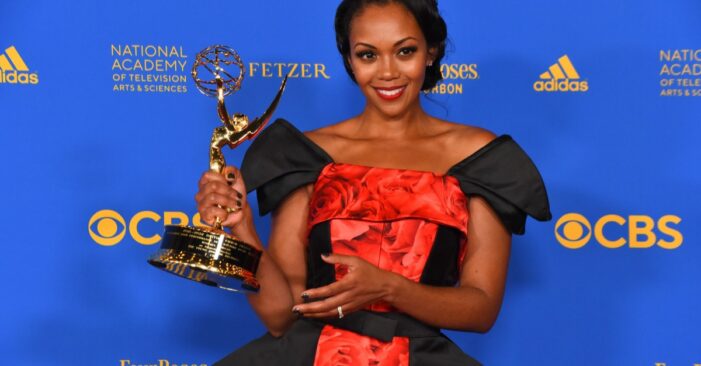 By Clarence Benoza, The Things

Making history with an Emmy! Actress Mishael Morgan of the hit CBS show The Young and The Restless has just become the first Black actress to win a Daytime Emmy for Outstanding Lead Actress. The 35-year-old star, who lost twice in a row in the supporting category, finally emerged victorious in this year’s ceremony, and was recognized for her role as Amanda Sinclair in the said series. Accepting her award, Mishael said, “I was born on a tiny island, Trinidad and Tobago, in the Caribbean, and now I’m standing on an international stage and I am being honored regardless of the color of my skin, regardless of my passport, for being the best at what I do.”

“Now there are little girls all around the world and they’re seeing another step forward and they know that no matter their industry, no matter their vocation, no matter what, they can strive to be the best at what they do. Not only can they achieve it, but they will be celebrated,” she added. Here is everything you need to know about Mishael, from her showbiz beginnings to personal life.

She was 19 years old and on her way to becoming a lawyer when Mishael Morgan figured in a horrible car accident that left her in a fatal condition. The actress talked about her near-death experience and how this led her to pursue acting in an interview with Soap Opera Network in 2014.

“That accident started making me think about acting more, because it was kind of something that I suppressed for many years,” she said. “I wanted to do the logical route and be a lawyer and do all of the right things, make all the right decisions. But then, after that accident, I just kind of rethought my entire life and I decided to just kind of take a go at it.”

On her very first acting audition, Mishael Morgan left quite the impression on producers that she was chosen to star in the music video of Trey Songz’s 2007 hit “Wonder Woman.” Only two years later, she landed her first regular role in a TV series and, just before she was supposed to go to law school, booked another gig.

“Basically, I was doing my undergrad and doing my LSATs at the same time, and I met my agent and… about 10 months into it, I booked a series regular role that was shooting out of Ottawa. I [had gotten] into law school, and I was totally going to go, and I just said, ‘You know, if something stops me from going to law school, it will be a sign’,” the actress recalled.

“And then I booked my second series, The Best Years two weeks before I was supposed to go to law school! So I called up Ottawa U Law and said that I wasn’t going to be attending, and that I was going to be a crazy actress!”

Mishael Morgan, 35, has been happily married to her husband Navid Ali since May 2012. They proud parents to two adorable children: Niam, 6, and Naliyah, 3. Speaking of her family, the doting wife and mother told Watch! Magazine, “Whenever I’m not having a great day, all I need to do is spend five minutes with my kids. They remind me to not take life so seriously.”

“I’ve been with my husband for 18 years. It’s awesome to come home to that person who knows the many sides of me,” she added. “I’ve come full circle, from wanting to be a lawyer to now playing one on TV, and he’s experienced the journey with me.”

On Monday morning my husband’s only brother, perished with his wife & 3 kids in a tragic house fire. I am still in absolute disbelief. My sister-in-law set up a fund, please pray for my family & donate if you are able. https://t.co/L2GVlMA5Pw

In 2022, just months before she won her first Emmy Award, Mishael and her family suffered a heartbreaking tragedy. Through a Twitter post, she revealed that her brother-in-law and his family — including his wife and three children — were killed in a house fire in Brampton, Ontario, Canada. “On Monday morning my husband’s only brother, perished with his wife & 3 kids in a tragic house fire,” Mishael tweeted. “I am still in absolute disbelief.”

Louie Felipa, the father of the wife killed in the tragedy, suggested that there were no working fire alarms in the home when the incident happened. Smoke detectors were reportedly taken down from the house because of a recent renovation. “Check your alarms,” he reminded others. “Take time to check your alarms. If you love your kids, check them.”

Why Mishael Morgan Was Forced To Take A Break From Acting

In the spring of 2021, Mishael Morgan was forced to take a break from acting after a freak accident caused her to have an emergency eye operation. The actress revealed the news to her fans on Instagram, writing, “So this happened! Emergency eye surgery not fun; but saving my vision, rocking a new sexy pirate look and one crazy story for the books… pretty fun!”

Be that as it may, she recovered from the surgery pretty fast, and by April was already back to work as Amanda Sinclair in The Young And Restless. Posting a photo of her inside the CBS Studio dressed as her character, Mishael wrote, “First day back and it’s like riding a bike!”

Why Mishael Morgan Left The Young And Restless

In July 2018, Mishael Morgan bade goodbye to The Young And Restless after her original character, Hilary Curtis, was killed off due to unsuccessful contract negotiations. However, she ended up returning to the show in 2019, after several fans expressed their disappointment over her departure.

“I saw that all my hard work paid off. My fans actually saw it, and they rallied behind me, and they wanted me back,” the actress told EBONY in an interview. “There’s not a better feeling than that, where you’ve put so much energy and love into your work and it’s received positively and people are not just rallying for your character, but for you.”

The actress added, “I felt honored. I was flattered.”

Prior to her nomination — and eventual win — as Outstanding Lead Actress in a Drama Series at the Daytime Emmys, Mishael Morgan was recognized by the same body for her role as Hilary Curtis, earning a nod for Outstanding Supporting Actress in a Drama Series for two consecutive years. She, however, ultimately lost to her co-star Camryn Grimes in 2018, and to Vernee Watson of ABC’s General Hospital in 2019.

Speaking to Digital Journal, Mishael Morgan defined success as the never-ending pursuit of excellence. “[It] means not settling,” she said. “For me, success means trying and even failing. It means going for something no matter what happens and trusting that is your path.” However, she is quick to add that success is not so much about greatness as it is about happiness and self-fulfillment. “Success is finally getting to a place where you are so content where you ended up and you are happy,” she said.

With that, the actress gave her message to those who are also trying to make it big in the industry.

“Don’t let the job and trying to get the job get in the way of living an amazing life. If you can’t be authentic and live an incredible life. then you can’t have authentic characters that have depth and have lived life unless you do it too,” she said. “So don’t stop your life because you are trying to book a job. Trust that all of the right jobs will come to you as long as you are committed to enjoying this one life that God has given us.”