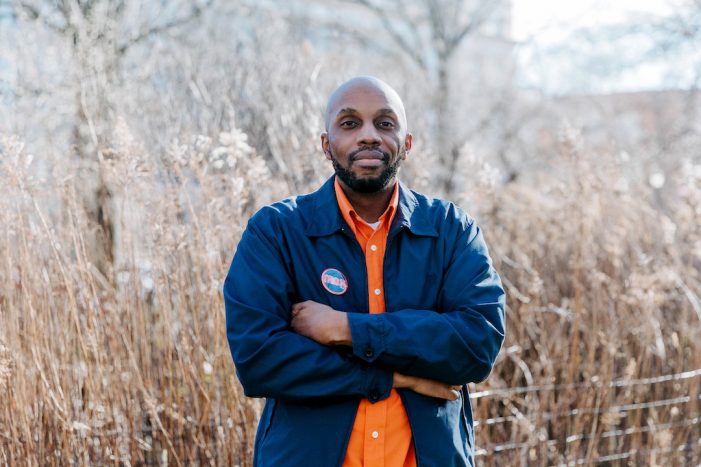 Hollingsworth has resided in Crown Heights for over 40 years and has been an integral part of the community.

Hollingsworth’s passion for activism began in 2016. At that time, he, and other tenants in the rent-stabilized apartment building where they resided, received a notice that their rent-stabilized apartment building would be converted into high-priced condominiums. Michael Hollingsworth organized the tenants to fight for housing justice and reached out to the Crown Heights Tenant Union to work with them to fight the issue.

That would be the first of many fights that tenant advocate, Michael Hollingsworth, would take on and help win for the sake of assuring housing justice for residents of his community of Crown Heights. Hollingsworth promises to continue fighting for tenants’ rights in the role of City Council Member for Brooklyn’s District 35.

Michael Hollingsworth discussed his run for City Council District 35 during an exclusive interview with Caribbean American Weekly, which can be heard here on People, Power, & Politics Radio Show. Hollingsworth does not see his lack of actual political experience as a deficit in the race for City Council. Quite the opposite. Hollingsworth hopes that Brooklynites will recognize that he has already been fighting for them voluntarily for over five years and has been committed to bettering the community at large.

“There are a lot of issues to tackle, and it’s time we have someone who comes from the neighborhood who is not politically connected and truly fight for the folks who haven’t had a voice in a long time,” Hollingsworth stated during the interview. “When you talk to most people who live in this District, housing is their number one issue, the lack of truly affordable housing, and that’s the main issue I want to champion in City Council,” added Hollingsworth.

Hollingsworth shared the issues he feels are currently affecting the Black community: “…education, the environment, policing, and criminal justice”, as well as “healthcare, economic opportunity…and no jobs.”

Hollingsworth’s love for Brooklyn was evident, as he recalled earlier days during his youth, being raised by his mother, who was from Alabama, and his father, who was originally from Guyana. He spoke about going to block parties in Brooklyn with his siblings, their father taking them to Brooklyn’s Labor Day Parade, and how the neighbors in the family’s Brooklyn neighborhood would watch out for each other’s children and correct them if they were misbehaving. “There used to be a sense of community. Families still found a way to make the neighborhood feel like a community,” stated Hollingsworth.

At this time, Michael Hollingsworth is counting on his Brooklyn community to come through for him with their votes. “I’ve been humbled by the amount of support, so far, that we’ve received from people. The message is connecting. We are finding out that people don’t want more of the same. They don’t want someone who is politically polished, but someone who comes from where they come from and has lived the experience…,” shared Hollingsworth with Caribbean American Weekly. Anyone interested in volunteering to help during the campaign can go to www.m4bk.com to read more and sign up.