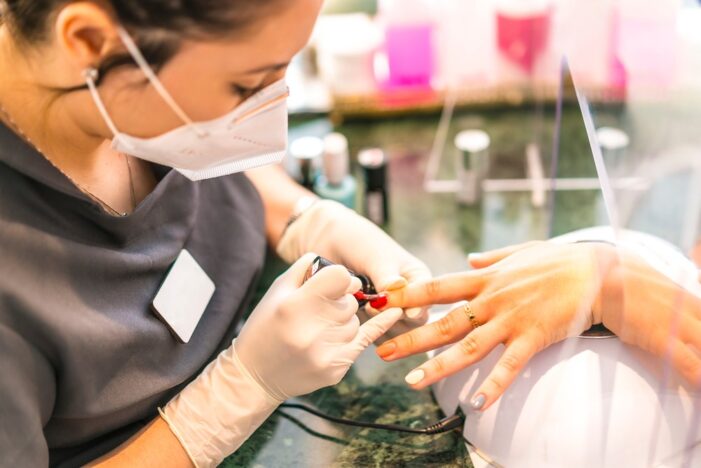 When 38-year-old nail salon worker Pabitra Dash recalls the physical pain she felt the first time she miscarried, she says that the emotional and mental anguish she felt hurt much more.

“After the miscarriage, no one comes back to support and give a good aura,” she said.

The joy she felt the second time she got pregnant was quickly squashed when she began to feel familiar abdominal pain.

“I knew it was going to be a miscarriage again,” Dash said.

Throughout her brief third pregnancy, Dash was consumed by anxiety. Since moving with her husband to New York from Nepal, they wanted to start a family. The thought of miscarrying again was too much to bear. Dash’s fears rang true when yet again she had to rush to the hospital in pain.

In total, Dash suffered seven miscarriages in the span of eight years. The miscarriages coincided with her time as a nail technician, which she quit in 2018. Initially, she was reluctant to talk openly about her miscarriages to others in the Nepali community. Nepali women who did know would shun her, afraid that her bad luck would rub off and cause them to miscarry as well. Still, she began to hear similar stories from her coworkers at the nail salon. As it turns out the chemicals that were in nail polishes, glues, and other chemicals that they were exposed to at the nail salon daily, may have caused miscarriages and other reproductive health issues according to advocates.

“I started to talk with other friends who had similar issues,” she said. “Some of them had no children too. From that, I learned it was related to our work.”

Last week, six years after it was first announced, New York State implemented long-awaited ventilation regulations in nail salons. The new regulations require nail salon owners to protect workers and clients by providing proper ventilation to filter out toxic particles and fumes. The roughly 7,000 nail salons across the state will be required to install a mechanical ventilation system or risk losing their license to operate. The regulations come as workers, supporters, and a growing number of experts have sounded the alarm about the reproductive health hazards women nail salon workers are exposed to daily.

“All these chemical smells make you depressed,” she said. “When I go outside I feel so relaxed but when I go inside the salon I feel like I want to cry, I want to be alone.”

In 2016, after nail salon workers organized to expose the rampant abuse in the nail salon industry, the state implemented a series of new regulations that would force nail salons to provide adequate ventilation as a way to mitigate the toxic effects of the chemicals often used by workers. Existing nail salon businesses were initially given five years to comply, and regulations went into effect on October 4, 2021. However, citing difficulties borne by the pandemic, these requirements were delayed twice by Governor Hochul, giving businesses another year to come into compliance with the requirements. Meanwhile, many nail salon workers, like Dash, have suffered from debilitating reproductive health issues.

“For decades, workers have spoken about reproductive damage as a result of their chemical exposure in nail salons,” said Charlene Obernauer, Executive Director of the New York Committee for Occupational Safety and Health (NYCOSH). “The results of our survey show what workers have consistently said about their health and well-being; ventilation regulations are essential to reducing this exposure and helping to create healthier nail salons for workers, customers, and owners alike. This is not just a workers’ rights issue, it’s a reproductive justice issue.”

Aaron Lamplugh, a research scientist at the Cooperative Institute for Research in Environmental Sciences, University of Colorado Boulder, has done extensive research into the level of toxins nail salon workers are exposed to and found the risks to the women workers are significant.

“There are a lot of chemicals in nail salons. It’s sort of a chemical soup,” he said. “We definitely measured unusually high levels of benzene, toluene, and other chemicals, all sorts of chemicals well associated with nail products.”

Chemicals such as benzene, which is found in some nail polishes are well-documented to cause significant birth defects when exposed to high dosages. Toluene, which also can be found in nail polish and fingernail glue, can cause kidney or liver damage as well as cause birth defects. Long-term exposure to Dibutyl phthalate, a common ingredient in nail polish, is known to cause miscarriages. Although the most toxic effects are only associated with high and persistent exposure, nail salon workers often work long hours in often tiny, unventilated storefronts day in and day out.

“The exposure that a lot of these workers are experiencing, there is a lot of potential for them to have adverse health consequences later in life,” Lamplugh said.

Like most of her coworkers, Dash was not aware of the prescient dangers she was exposed to on a daily basis. She didn’t realize that some of the nail polish bottles had warning labels written on them. At the time, she was not as proficient in English as she is now, and many of her coworkers didn’t understand what was written on the bottles. Only after she began to be involved with Adhikaar, a women-led worker’s center that services the Nepali-speaking community, did she become aware of the danger.

“There is already written on the color [nail polish] that this color may be harmful to you while you pregnant but we didn’t know that,” said Dash. “ Later I read this for myself and learned that formaldehyde is not good for reproductive health.”

Senator Jessica Ramos, Chair of the Senate Labor Committee and sponsor of the Nail Salon Minimum Standards Council Act is grateful that ventilation regulations have finally gone into effect but, wishes it had come sooner.

“In order to do their part in ensuring the small businesses that employ them made it through the pandemic, workers compromised on a delay of the implementation of these ventilation standards,” she said. The choice between their livelihood and their health is not one we should be asking workers to make.”

Since quitting the nail salon industry, Dash was finally able to have a son. She has taken on a leadership role in Adhikaar where she has met so many other women who experienced miscarriages or gave birth to children with birth defects. It’s never easy. When she thinks back on what she was forced to experience it pains her.

“Is this a human rights country, is this the way they treat women who have miscarriages?” she said. “It’s really hard and these are the things that make me depressed.”

Although there was a time when she wouldn’t talk about her miscarriages out of shame, she now feels that she has to so that other women don’t go through the same experience as she did.

“I really don’t want to go deeper and deeper but I have to because those are the things that happened in my life and this is not acceptable.