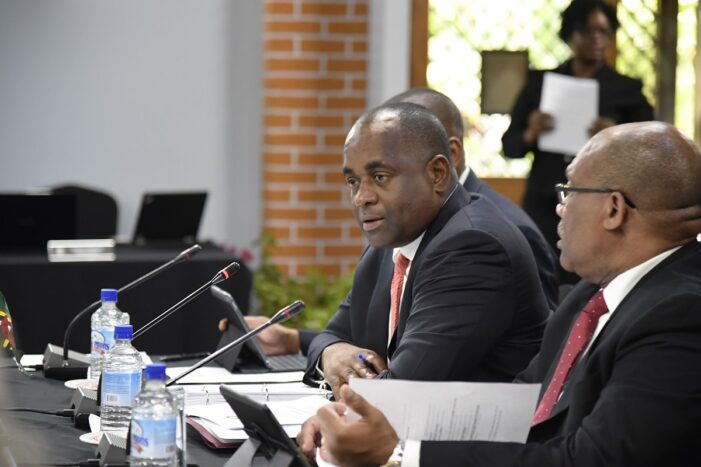 Prime Minister Roosevelt Skerrit says the Future Housing Program is a product of his government’s housing policy which seeks to provide for the more vulnerable in society.

The Prime Minister said at the official launch of the program recently, that this program which is is expected to benefit young Dominicans employed within the public and private sectors, is part of that policy which is “premised on the understanding that the government has a responsibility” to provide for those who have greater difficulty fending for themselves.

“The Future Housing Program will see the construction of homes for sale to young professionals and young Dominicans who are employed within the public and private sectors and are looking to invest in their own home,” he said. “This can then be used for security to build greater wealth which can be transferred to their children and grandchildren.”

Pointing to a number of benefits in this program, the Prime Minister said it is a stable investment that will provide the beneficiaries with the confidence to expand their finances, invest more and generally, live comfortable lives.

“Home ownership is much more than putting a roof over your head,” he stated. “Purchasing a home is a foundational step for building generational wealth and one of the most consistent ways to build a financial bedrock for future generations.”

Skerrit also believes that proper housing provides security for families and contributes to the strength and progress of communities.

“A stable home can positively impact our social and economic well-being and is a sanctuary where families can live in peace and dignity,” the Prime Minister noted.

He went on to say that the homes, upon completion, will be sold at less than the cost of construction.

“This is our way of subsidizing the overall cost of the home so that it is within your financial reach as young professionals and young Dominicans,” he explained. “It now becomes easier for you to qualify at the banks and credit unions [that] have come on board with us.”

The Prime Minister gave the assurance that if the first phase is successful, the government will expand the program to other parts of the island.

“And based on the attendance, I have no doubt that it is going to be extremely successful, because of the interest from the citizens,” Skerrit said.

He said the government will be moving to Hillsborough Gardens and St Joseph in the next step.

Meanwhile, the Prime Minister mentioned that another important element of the housing program is the appointment of an advisory group to guide the government as it develops and implements this program.

“It is made up of 20 young people who come to us from a variety of backgrounds and fields,” Skerrit revealed. “These young people have been constructive in their recommendations to us; we have considered their suggestions and in some cases, we have had to caution them against some extravagances, because we are older and more experienced.”

He said in the Dominica Labour Party (DLP) 2019 manifesto, his government pledged that the people of Dominica will be properly housed and that the national housing stock would be amongst the highest quality and most resilient in the Caribbean.

“We have, and continue to deliver on this promise to provide new and upgraded homes of superior standards to the citizens across the length and breadth of Dominica,” he said. “We are making these interventions during a period of severe strain on economies worldwide, including our country Dominica.”

Skerrit continued, “Due to the war in Ukraine and the Covid-19 pandemic, we are grappling with rising inflation and the corresponding increases in the price of goods and services, recognizing also, that this government’s revenue has also been impacted…However, we cannot in difficult times abandon our responsibilities to the people of Dominica.”

Skerrit urged young Dominicans to look into this opportunity seriously.

The tagline for this program is, “Empowerment through Ownership – a path to Generational Wealth”.

More information on the program is available on futurehousing.gov.dm.

Government says its aim is to build 5000 homes in 5 years.