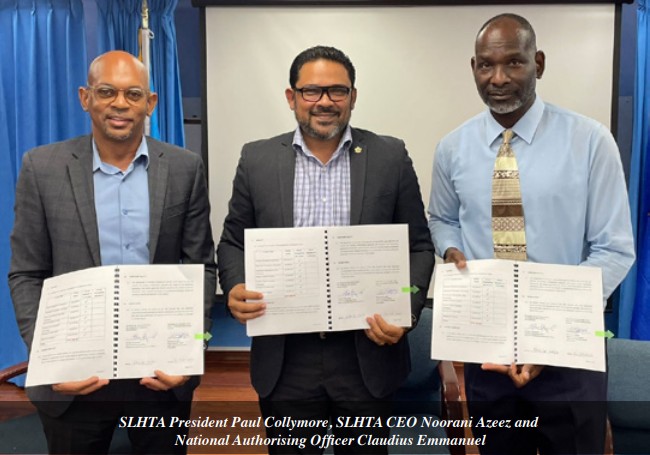 One hundred unemployed Saint Lucian youth are poised to benefit following the signing of a Memorandum of Understanding (MOU) between the Saint Lucia Hospitality and Tourism Association (SLHTA) and the Office of the National Authorizing Officer (NAO). The SLHTA is among seven institutions that will receive grants from the government of Saint Lucia, under an EC$16.8 million financing agreement between the government and the European Union (EU). The financing agreement is aimed at supporting the Generation of Employment through Private Sector Development (GEPSED) project and seeks to enhance the employability skills of the youth by providing them with opportunities for training, apprenticeship and employment. The MOU signing was held on Thursday, November 18, 2022, at the Ministry of Infrastructure, Union Complex, Union. In attendance at the historic event were EU Ambassador to Barbados and the Eastern Caribbean States H.E. Malgorzata Wasilewska, Prime Minister Philip J. Pierre, National Authorizing Officer Claudius Emmanuel and representatives of the various institutions. The grant will be used to expand the SLHTA’s On-The-Job Training Program and will fund inter alia mobilization efforts, orientation seminars, psychosocial counselling and stipends for trainees. SLHTA CEO Noorani Azeez described the signing as a watershed, since it is the first time in the SLHTA’s sixty-year history that the Association has received a grant of this nature. Ambassador Wasilewska said that the EU has always placed a significant importance on its longstanding partnership with the government and people of Saint Lucia. She stated that the EU member states are big fans of vocational training, describing it as a “driving force of sustainable development in modern economies.”