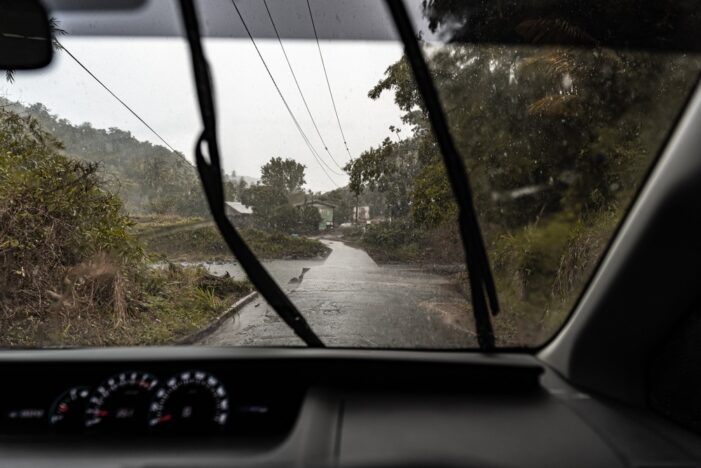 It came out of nowhere! It was a sunny Sunday morning but by 3pm the landscape had changed dramatically. Out of the blue came the worst flooding in the north of the island for 2022, just as the region is nearing the end of the 2022 Hurricane Season. At 12 noon the forecast was for “moist and unstable conditions associated with a trough system” to cause some “scattered showers and possibly isolated thunderstorms over the Eastern Caribbean region, during the forecast period”. After 30 minutes of intense rain, most bridges in the north of the island were overwhelmed; several homes in low-lying areas along riverbanks, especially in the Corinth area were experiencing rising flood waters. Parked vehicles were flooded, a couple washed away, one into a river. Videos and pictures on social media portray the horror confronting homeowners, businesses, farmers, and those trapped by the surprise November 6th trough system.

The Prime Minister toured affected areas with technical staff of the Ministry of Infrastructure, as emergency personnel, technical crews, LUCELEC and volunteers rushed to help hardest hit areas, mainly in the north of St. Lucia. The south experienced little to no rain! The Minister for Infrastructure, Stephenson King on his way to Mexico was recalled by the Prime Minister Philip J. Pierre to deal with the aftermath of the November 6th flooding. The Prime Minister released a statement via his Facebook page noting that “Reports of damage are still being collected and the assessments will continue into Monday”.