Reyna states that Hochul, trying to cut Albany insider deal to remove her former LG from the ballot is outrageous and the voters should decide next LG. 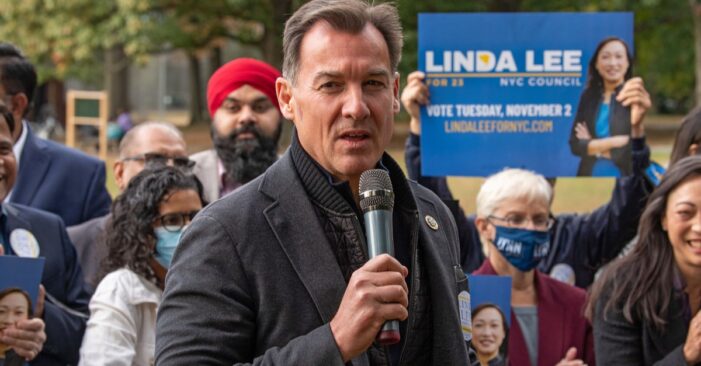 “Kathy Hochul has disqualified herself from appointing a new Lieutenant Governor,” said Suozzi during a Zoom press conference with Reyna. “She knew when she chose her first LG that he had ethical issues. But she put her own political considerations ahead of good, sound judgement.”

“She has proven that she cannot handle this, and she needs to let the people decide, they will do a far better job than she has.”

In her first major act after becoming interim Governor last year, Hochul chose then State Senator Brian Benjamin to be her LG, even though there had been numerous news reports of unethical behavior, including that he lied on his background forms that he submitted while being considered for LG. Since Benjamin’s arrest, Hochul has conceded that her vetting process was lax.

Suozzi also contended that Hochul was not being truthful when she claimed that she was surprised by Benjamin’s arrest. In her only interview since her LG resigned last week. Hochul said on the Brian Lehrer radio show that she made her decision with the information she had at that time.

“Kathy Hochul is not being straight up with all of us,” stated Suozzi. “For her to say she didn’t know shows either a lack of judgment and a lack of experience or it’s a complete and total lie. Either way, New Yorkers deserve more from their Governor.”

Reyna joined in by saying that under Hochul, ethical lapses in Albany are worse than ever and pointed to Hochul and Democratic Party leaders trying to remove Benjamin’s name from the Democratic primary ballot in June by trying to cut deals to either change the law in the middle of an election year or to have Benjamin literally move out of state.

“It’s outrageous, it’s Albany deal making at its worst and it’s a disservice to the people of New York,” said Reyna. “This election year is a choice between the same old Albany corruption, or new leadership.”

New York State law states that once a candidate has accepted the state Democratic Party’s nomination at their state convention, they can only be removed from the ballot by running for another office, moving out of state, or death.

Suozzi closed the press conference by saying, “The bottom line is that Hochul’s handpicked Lieutenant Governor was arrested right under her nose. She has continued a culture of corruption. It’s the same Albany mess that’s given us higher taxes, higher crime, and a state that too many cannot afford to live in.”

“Kathy Hochul has proven unable to clean up Albany, so let the voters do it.”