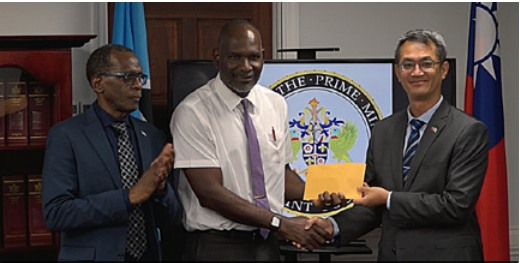 The newly enacted Youth Economy Program, the brainchild of Prime Minister Hon. Philip J. Pierre, has attracted support and acclaim from Saint Lucia’s close ally and diplomatic partner the Republic of China (Taiwan). Hon. Pierre’s Youth Economy Program affords Saint Lucia’s young aspiring entrepreneurs and business owners an exclusive and streamlined facility to acquire grant and loan financing to start or expand their micro-business ventures. The Prime Minister and his Cabinet are pleased to announce that the Government of Taiwan has decided to invest in Saint Lucia’s Youth Economy. The Taiwanese Ambassador to Saint Lucia, H.E Peter Chia-yen Chen personally handed over a cheque valued at XCD137,000 to the Permanent Secretary in the Ministry of Economic Development during a brief ceremony on October 17, 2022. The Pierre Administration has allocated more than XCD 10 million in the 2022/23 Budget towards the Youth Economy Program. The legislation establishing the Youth Economy was passed in the House of Parliament in July of this year. The implementation of Hon. Pierre’s Youth Economy will help create a more conducive economic environment that promotes entrepreneurship and facilitates business development and growth in Saint Lucia, primarily amongst the nation’s youth.