The Loathsome Hypocrisy of Republicans Who Now Applaud Volodymyr Zelensky

When congressional Republicans had a chance to impeach and convict Trump for blackmailing Zelensky, 247 of them refused. 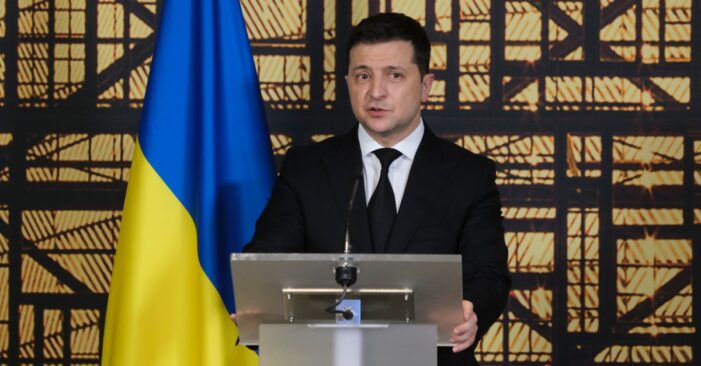 By John Nichols, The Nation

Ukrainian President Volodymyr Zelensky got a hero’s welcome from the US Congress this week, with Republicans joining Democrats in applauding for the embattled leader of a country that is resisting a brutal Russian invasion. But a lot of the people who were applauding failed Zelensky and the Ukrainian cause when it might have mattered most. That was when former President Donald Trump was impeached and tried for seeking to blackmail Zelensky for political purposes.

The political pendulum swings so fast these days that it is easy to forget what was happening barely two months ago, let alone two years ago. But in late 2019 and early 2020, Ukraine was at the center of a national debate about Trump’s lawless presidency, and his political extortion of Zelensky.

On July 25, 2019, Trump phoned Zelensky with the express purpose of pressuring the newly elected president of Ukraine to support an investigation into the family of the political rival he most feared, Joe Biden. Trump admitted that he mentioned the military aid that Ukrainian officials felt they desperately needed. Yet, instead of signaling that it would be delivered, Trump asked Zelensky to “look into” the situation with Biden’s son, Hunter. Trump said, “There’s a lot of talk about Biden’s son, that Biden stopped the prosecution and a lot of people want to find out about that so whatever you can do with the Attorney General would be great.”

With the aid on hold, thanks to Trump’s intervention, and with the president demanding a number of politically charged concessions, Zelensky was given explicit instructions to follow if he wanted to secure a White House meeting with Trump that would presumably free up the aid.

When Gordon David Sondland, the US ambassador to the European Union at the time, testified before the US House Intelligence Committee as part of the impeachment inquiry into Trump, he said, “I know that members of this Committee have frequently framed these complicated issues in the form of a simple question: Was there a ‘quid pro quo’? As I testified previously, with regard to the requested White House call and White House meeting, the answer is yes.”

Except it wasn’t for Republicans in the House and Senate—some of whom, like Senator Ron Johnson (R-Wisc.), had personal knowledge of the president’s blackmailing of Zelensky, as they had literally discussed it with Trump. Sondland testified at the November hearing, “I shared concerns of the potential quid pro quo regarding the security aid with Senator Ron Johnson.” As I wrote in November 2019:

Johnson has acknowledged that he was aware of complaints that Trump was withholding aid to Ukraine for political purposes—and that he discussed those complaints with the president. Yet Johnson chose to keep these conversations secret until after a whistle-blower came forward. The Milwaukee Journal Sentinel reported in October:

Four ethics experts say Johnson—a member of a branch of government that exists, in part, to provide a check on the president—should have…alerted other senators, explored holding an oversight hearing or even told federal investigators.

Johnson did none of those things.

In fact, Johnson did the opposite, emerging as an unblinking defender of his party’s president.

It was shocking behavior on the part of the Wisconsinite, who chaired the Senate Homeland Security and Government Oversight Committee at the time. But he was hardly alone. Republicans who knew the facts, either directly or from the testimony provided by top diplomats during the House and Senate impeachment inquiries, chose service to Trump over the truth. And over solidarity with Zelensky and the Ukrainian people.

While the aid would eventually be delivered, the message was clear: For congressional Republicans, Trump extortion of Zelensky was not their concern.

On December 18, 2019, the US House of Representatives voted on whether to impeach Trump for “abuse of power by soliciting the interference of Ukraine in the 2020 U.S. presidential election.” The resolution was approved by a 230-197 vote. But every single Republican member who participated in the vote—including Wyoming Representative Liz Cheney and Wyoming Representative Adam Kinzinger—voted against holding Trump to account.

On February 5, 2020, the Senate acquitted Trump on the abuse-of-power charge. Sixty-seven votes were needed to convict the president, but only 47 Democratic caucus members and one Republican, Utah Senator Mitt Romney, voted for conviction. Ron Johnson joined Senate minority leader Mitch McConnell (R-Ky.) and 43 of their GOP colleagues in rejecting any accountability for Trump. At a point when they could have sent a strong signal that it was wrong to play politics with Ukraine’s future, they refused to do so.

Indeed, as the group Citizens for Responsibility and Ethics in Washington noted, “Donald Trump illegally withheld weapons from Ukraine and Republicans in Congress voted 247-1 that it wasn’t a problem.”

Yet when Zelensky addressed the Congress Wednesday those same Republicans were making sure to be photographed applauding for the Ukrainian president—as if there was no history, as if no one would remember.

To his credit, US Senator Brian Schatz (D-Hawai’i) remembered.

“If you are a reporter, and there is a battle for the free world led by Zelensky and Biden,” Schatz said Wednesday, “you don’t have to pretend not to remember that Republicans exonerated Trump for extorting Zelensky.”