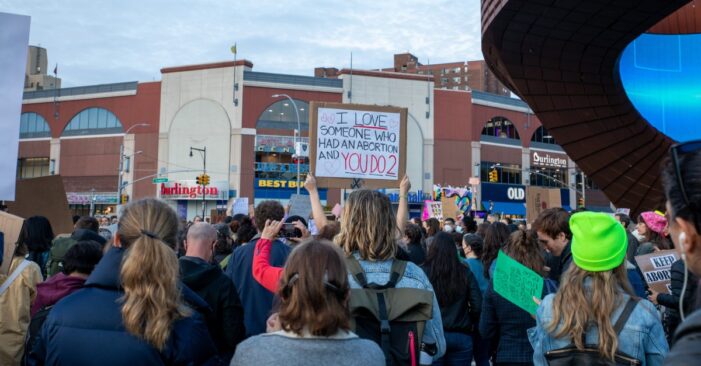 By the evening of Sunday, May 1, the nation was shocked following a leaked document stating that the U.S. Supreme Court may overturn a 49-year-old landmark into a state-determined decision. The Roe v. Wade ruling established a constitutional right for women to choose to have an abortion but may now become banned by states.

What is Roe vs. Wade?
This landmark Supreme Court case origin dates to 1969 in Texas, where abortion was ruled unconstitutional, except for when the mother’s life is endangered. A 25-year-old single woman, under the pseudonym “Jane Roe,” filed a lawsuit against the state of Texas because she wanted to abort the pregnancy of her third child from an acclaimed rape.

Upon the case’s rejection, she carried the pregnancy to term. But a lawsuit was filed afterward, challenging the criminal abortion laws in the state. To defend the anti-abortion law, the district attorney for Dallas County, Henry Wade, oversaw the case creating the lawsuit titled, Roe v Wade.

However, in 1973, ‘Roe’s appeal alongside another 20-year-old Georgia woman, Sandra Bensing, was debated at the U.S. Supreme Court. They argued that abortion laws in Georgia and Texas were an infringement on a woman’s right to privacy which is against the U.S. Constitution.

In a vote ending at seven to two, the supreme court justices ruled that governments (states) lacked the power to prohibit abortions. They ruled that the U.S. Constitution protected a woman’s right to terminate her pregnancy.

How Roe vs. Wade Law affects Women’s Rights
The law protected a woman’s right to an abortion in pregnancy’s first three months (trimester). Permitted some government regulations in the second trimester of pregnancy and empowered the state to ban or restrict abortions in the last trimester. In the final trimester, it gave a woman the right to obtain an abortion despite any legal ban (only) if medically certified by doctors that it can save her health or life.

What’s the Current Challenge to Roe v Wade?
The case was referred to the Supreme Court for consideration when Mississippi decided to ban abortion after 15 weeks, making abortion rights a decision for individual states rather than a national decision. The leaked first draft of Judge Samuel Alito argued that the original Roe v Wade judgment is original “egregiously wrong.”

If the Supreme Court overturns the ruling, abortion might become illegal in almost half (22) of U.S. states. Although the decision remains pending until published by late June or early July. The overruling could almost instantly lead to stricter limits on access to abortion services in many South and Midwest states ready to impose broad abortion bans. Over 11 states are poised to still legally allow the procedure, with examples like New York and Illinois. New York state had envisaged such a decision and had worked proactively to safeguard New Yorkers and anyone who comes to the state for the service.

According to a statement released by the New York State Senate Democratic Majority, “Unfortunately, we knew this day was coming. When we took the Senate Majority, we immediately codified Roe v. Wade into state law—allowing us to withstand any Supreme Court decision.” The press release stated, “The Senate Democratic Majority will continue to stand up for choice and women’s health. The state of New York has always stood as a beacon for those seeking refuge, which will not change through the uncertain days ahead. We will remain a Destination State for any seeking abortion care.”

Many argue that overturning the law has a more significant implication as other human rights issues might become subject to state decisions and, in principle, party decisions. For example, the John Lewis Voting Rights Act is still outstanding in the Senate. Both issues might likely set another filibuster in motion, similar to previous legislation. The combined bills, the Freedom to Vote Act and the John R. Lewis Voting Rights Advancement Act, also known as the John R. Lewis Voting Act, have been previously blocked over three times with a filibuster by Republicans.

The bill, if passed, would, among other provisions, make Election Day a national holiday and establish new automatic voter registration programs. It will also introduce a minimum of 15 consecutive days of early voting and require that all voters be able to request the option of voting by mail.

However, Senate Democrats’ inability to overcome the Republicans’ blockade and intra-party disunity on filibuster rules truncated the bill’s passing.

What is the Filibuster?
Often employed by a minority of the senators in the United States’ parliament, this legislative practice uses the power of ‘talk’ to delay or prevent a parliamentary action. The senator(s) talk for so long that the majority will withdraw the bill or grant concessions. It is a tradition that allows unlimited debate, otherwise called filibustering, to prevent or delay action on legislation. For a filibuster to be settled, it requires 3/5 or 60 votes.

The process is an easy way of stalling legislation. Senators in the minority party can object to a bill and force supporters to produce 60 votes. Such votes have proved impossible and will require the Vice President, Kamala Harris, who chairs the Senate, to swing the decision by her vote in the case of a tie.

In theory, filibusters protect the minority’s view from the domination of the majority. They have been effectively used to prevent action on numerous pieces of legislation over the years—a recent talking filibuster over the John Lewis Voting Rights bill. The debate lasted over 10 hours. Lawmakers took the floor and laid arguments before casting a final vote.

The filibuster has served as a weapon for Republicans. They have used it to prevent a Democratic control of federal lawmaking. Democrats can use it to overturn the ruling over Roe vs. Wade if the Supreme Court follows through with the decision in the initial draft.

If overruled, it will present a unique opportunity for Democrats to abolish the filibuster to pass the abortion rights law and the voting rights law earlier truncated, as both are human and constitutional rights.

In support of this stand, Congresswoman Yvette D. Clarke, representing the 9th District of New York, decries the ruling and considers it an assault on women’s reproductive rights. According to her press release, “Rejecting Roe v. Wade 50 years later amounts to an all-out assault on women’s reproductive rights and freedoms. It is a political act by an extreme and hostile Supreme Court. Fifty years ago, the law established that every woman had the right to control her body. This request already existed for every man.

The Congresswoman called for an end to the debate and a need to stand up in defense. “I will not stand for this blatant political attack on women. “She says, “New Yorkers have a long and proud history of protecting and upholding women’s reproductive rights. We must end the filibuster and make the Women’s Health Protection Act law. Today, more so than ever, it is incumbent upon elected officials at every level of government to ferociously protect a woman’s right to choose.”

The New York Senate Democratic Majority made a similar clarion call saying, “Our fight is not over. Our partners in Congress must act, and the choice must be codified into federal law.”

Citizens are also encouraged to continue to advocate for themselves and join in the rally and demand for civil rights. Brad Lander, New York City’s Comptroller, called for participation,” This is a moment we have feared for so long.” the Comptroller said. “The Supreme Court could strike down Roe v. Wade, making abortion care illegal overnight in some places and threatening health care access and autonomy for millions of people. We are not backing down on defending health, autonomy, and democracy. We will fight this together.”