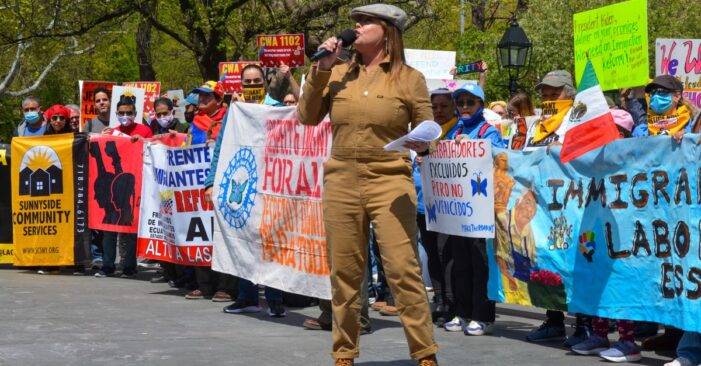 The City Council, controlled by Democrats, passed the law last December 2021, and it went into effect in January after both Mayor Bill de Blasio and his successor, Eric Adams, declined to either sign or veto it.

Hundreds of workers march to Foley Square in New York City to demand stronger worker protections and a full pathway to citizenship for immigrants on May 1, 2022. (Shutterstock)

By Chris Tobias, Special to the Journal

On Monday, June 27, the Richmond County Supreme Court decided to invalidate “Our City Our Vote”- Local Law 11, which gave New Yorkers with legal permanent status or work authorization the right to vote in municipal elections. Under the legislation passed by the New York City Council in December 2021, non-citizens who have lived in the City for at least 30 days and are legal permanent residents in the US. Green card holders, individuals with work permits, and DACA holders — would be allowed to vote in city elections, including the mayor, public advocate, borough president, and city council. The law was set to go into effect in January 2023, with over 800,000 New York City residents will become eligible to vote.

State Supreme Court Justice Ralph Porzio, based in Staten Island, said in a written decision that the legislation is illegal and violates the state constitution, which only provides for citizens to vote. “There is no statutory ability for the City of New York to issue inconsistent laws permitting non-citizens to vote and exceed the authority granted to it by the New York State Constitution. Though voting is a right that so many citizens take for granted, the City of New York cannot “obviate” the restrictions imposed by the constitution,” Porzio wrote.

Listen to The Immigrants’ Journal interview with Wennie Chin, the Director of Civic Engagement at the the New York Immigration Coalition (NYIC) on Local Law 11 below:

History of Local Law 11
Prominent African American Council members Charles Barron and Bill Perkins started the journey in 2005. The Bill, sponsored by the current Commissioner of the Department of Transportation and then Councilmember Ydanis Rodriguez, was a significant win. Rodriguez strongly believed in the value of the Bill for New Yorkers and the City. At the time, he said, “In one of the most diverse cities around the world, we must ensure adequate representation for all New Yorkers. That starts by expanding the scope of who is allowed to vote in our local elections.”

In a city built by the contribution of immigrants, they must be honored and allowed to participate in critical decisions like selecting their representatives. “Immigrants in New York City own more than half of the local businesses and contribute over $180 billion in GDP citywide. Immigrant New Yorkers kept New York City running at the pandemic’s peak. Over half of our essential front-line workers are immigrants, and approximately one in five are non-citizens New Yorkers. They have earned the right of participation in our city elections,” he noted. These contributions and facts supported a law that stands to change the practice of taxation without representation that has been in effect for a long time.

Of course, there was strong resistance by Republicans and, surprisingly, a few Democrats. Staten Island Borough President Vito Fossella led the charge stating, “The right to vote is one of our most sacred privileges and obligations. Last night, legislation became law that makes a total mockery of the concept of American citizenship.” Fossella, who became the lead plaintiff in the case, reiterated, “This unconstitutional act cheapens what it means to be a citizen and is an insult to every immigrant who has followed the law, taken citizenship classes, and swore an oath to our nation.”

New York City Council Minority Leader Joe Borelli was among the Republican lawmakers who sued the city, arguing it would change how they campaign and dilute votes. “Every administration, including the de Blasio and the Bloomberg administration, has been clear, saying this law would be unconstitutional and against the current statute. And now a judge has affirmed that decision,” Borelli said.

Could This Have Been Prevented?
In 2021, both former Mayor Bill de Blasio and current Mayor Eric Adams had an opportunity to sign the Bill into law. Although they didn’t veto the measure, neither did. They allowed it to take effect naturally. Mayor Adams, at the time, announced he would not veto the measure after being concerned about certain aspects of the Bill. In a statement released to the press on January 8, Adams said, “I believe that New Yorkers should have a say in their government, which is why I have and will continue to support this important legislation. While I initially had some concerns about one aspect of the Bill, I had a productive dialogue with my colleagues in government that put those concerns at ease. I believe allowing the legislation to be enacted is by far the best choice and look forward to bringing millions more into the democratic process.”

Publisher and Legal Adviser of the Immigrant’s Journal, Brian Figeroux, Esq., called on Mayor Eric Adams to fully support Local Law 11 not just in words but in deeds. “I believe Mayor Adams should throw his full support, 100 percent behind Local Law 11. You are the mayor now; we need action, not promises. See that Local Law 11 stays alive. Let this be part of your legacy.”

Reaction to the Ruling
Reaction to the ruling is heavy with disappointment, determination, and outrage. A spokesperson with the City Law Department wrote, “This is a disappointing court ruling for people who value bringing in thousands more New Yorkers into the democratic process. We are evaluating the next steps.”

Murad Awawdeh, Executive Director, New York Immigration Coalition:
“The decision to overturn Local Law 11 by this lower court in Staten Island comes as no surprise to us because the Republican opponents to the law specifically placed their lawsuit in a court they knew would be favorable to them. Despite today’s court decision, we will keep fighting to ensure that the nearly one million New Yorkers who are building their lives here and are investing in our communities can have a say in their local democracy. We remain firm in our certitude that municipal voting is legal and plan to support the appeal of this judge’s decision. We refuse to allow today’s verdict to further the disenfranchisement of Black and brown communities in New York City.”

Susan Stamler, Executive Director, United Neighborhood Houses:
“We are deeply disappointed in the Richmond County Supreme Court’s decision today around Local Law 11. United Neighborhood Houses has supported expanding the right to vote to immigrants for over a decade and will continue to support this law throughout the appeals process. We must make sure that more New Yorkers have a say over what happens in their neighborhoods and cannot let this verdict silence the voices of immigrant New Yorkers.”

Fulvia Vargas de Leon, Associate Counsel, LatinoJustice PRLDEF:
“Today’s court decision disenfranchises almost a million New Yorkers and attacks the very core of our representative democracy. The right to vote extended by Local Law 11 presented an opportunity to remedy the contradiction between calling so many immigrant workers essential, asking them to risk their lives to keep the City going, while denying them a voice in local government that makes vital decisions about their lives. LatinoJustice PRLDEF is deeply disappointed that the court has chosen to deny access to the franchise to people so integral to the functioning of our City. LatinoJustice and our legal partners look to appealing the decision and restoring the right to vote to fellow New Yorkers who deserve that right.”

“Today, a court in Staten Island decided that nearly one million New Yorkers who live and work here legally should have no say in how local government affects them or their families,” said Council Member Sandra Ung. “These are our neighbors who support our City through their tax dollars. By overturning Local Law 11, a judge has ruled that they have no voice in how their kids are schooled or the parks in their neighborhoods are maintained. I am fully behind an appeal of this decision and confident that when the case is heard, the legality of municipal voting will be upheld.”

“Today is a dark day for democracy in New York City. While Republican legislatures across the country have restricted the right to vote, our city fought to expand this important right. But today is a disappointing setback,” said Immigration Chair, Council Member Shahana Hanif. “While the courts may follow outdated and xenophobic precedent ingrained in the very fabric of our constitution, we know that our immigrant neighbors deserve a voice in our democracy. They are just as much a part of our City as each and every one of us, and their exclusion from voting is yet another form of racist gerrymandering. This decision is a setback to our vision of a free and open society, but it is not the end. We will continue to fight for all New Yorkers.”

“The court’s decision to strike down the historic Our City, Our Vote legislation (Local Law 11-2022) is a severe blow to our city’s democratic process and its institutions,” said Council Member Crystal Hudson. “Across the five boroughs, there are close to one million people who pay taxes and contribute to the wellbeing of our communities yet have no say in municipal elections. Fighting to include these voices in our electoral process is a responsibility we cannot shy away from. In light of this decision, we must continue to organize and advocate for the disproportionately Black and brown New Yorkers whose voices are not taken into account. Until we secure a just, equitable, and truly representative future, we will not stop fighting to include all New Yorkers.”

“All of our neighbors should have a say in how the city responds to the needs of the communities,” said Ben Thomases, Executive Director of Queens Community House. “Many of the individuals and families we serve continue to contribute to the City’s economic, cultural, and social expansion but have been unable to vote on policies affecting their daily lives. Immigrants across Queens and the rest of New York City deserve to have a voice in our democracy.”

CAIR-NY Legal Director Ahmed Mohamed:
“CAIR-NY is deeply disappointed by the court’s decision to invalidate Local Law 11—a law that represented the largest enfranchisement of voters in our City’s history in over a century. We believe this case was wrongly decided, and the decision strikes at the core of our democracy and values as a city of immigrants. CAIR-NY and our legal partners will appeal this decision, and we are confident that the appellate courts will restore the right to vote for all immigrant New Yorkers enfranchised by Local Law 11. CAIR-NY and the thousands of Muslim New Yorkers impacted are not deterred and remain firm in our commitment to immigrant voting rights.”

Women Creating Change’s President and CEO, Carole Wacey, and Senior Program and Policy Manager, Lea Giddins:
“Women Creating Change has been fighting to expand voting rights since our founding by suffragettes more than 100 years ago, and today’s decision will not deter us. The Richmond County Supreme Court’s choice to invalidate Local Law 11 is a minor setback, but we are committed to working alongside our partners to support the forthcoming appeal. Step by step, we remain steadfast in our mission to build a more inclusive and equitable democracy, which starts with extending the right to vote to one million immigrant New Yorkers who have made their lives here. At a time when municipalities across the country are rolling back voting rights, New York City has an opportunity to lead. We must not squander it.”

The fight is not over. There is the opportunity to appeal. Every citizen has the right to vote, but certainly not at the exclusion of others.