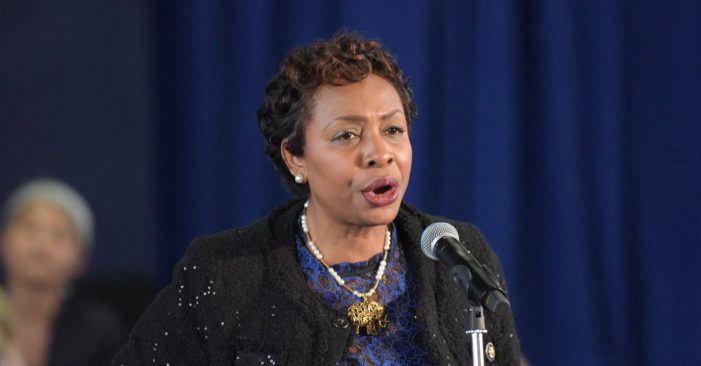 During the unprecedented and epic year of 2020, the global COVID-19 pandemic shined a light on the troubles that have long plagued the United States – systemic racism, injustice, inequality, and disparities amongst our communities of color. In an exclusive interview with Caribbean American Weekly, the United States Congresswoman Yvette Clarke, who represents Brooklyn’s 9th Congressional District, shared her thoughts on the problems that plague our society. They included the January 6 insurrection and her commitment to leading her community to recovery during this global COVID – 19 pandemic and economic crises and the Roadmap to Freedom, a bold proposal immigration proposal co-sponsored by herself and other progressive Congressional Democrats.

Congresswoman Clarke agreed that the issues outlined by the Caribbean American Weekly, “…the pandemic, police murders, social justice activism, the insurrection, and economic hardship…” are the main issues that have impacted the community. While no group of people was left untouched by the troubles of these times, immigrants, particularly those of color, suffered at a disproportionately higher rate than others. Congresswoman Clarke reported that her community of District 9 was one of the hardest-hit communities during this pandemic. She expressed her commitment to making sure they are at the center of COVID – 19 recovery efforts.

Public records showed that immigrants make up the largest number of the essential workers, who have been at the front lines during this health and economic crises, as doctors, nurses, home health aides, teachers, and more. However, they were repeatedly left out of recovery efforts under the former President Trump’s administration.

Many persons are concerned and apprehensive about taking the vaccine for COVID-19. Clarke shared her thoughts and offered encouragement:

Well, I have always said that if there is a group of accustomed people, being vaccinated is folks from the Caribbean, whether for malaria or chikungunya. We are more susceptible and have been in our homes of origin to tropical diseases and have had to be vaccinated. What I’m saying to our folks is a couple of things. One, this vaccine was developed with our communities in mind. Many of the scientists who worked on the development were from communities of color. Persons in the clinical trials were from our community. The first person in the United States of America will receive the vaccine was a frontline worker, a Jamaican nurse. I have been vaccinated myself, and I am proud to have received this vaccine to demonstrate to my constituents, which may be apprehensive, that there are no adverse effects to being vaccinated. What I would say is, the most adverse thing that can occur is to have this level of protection, not use it, and then have our families subjected to the virus. That, I understand, is extremely painful to struggle through. That we know in many instances, particularly in black and brown communities, has been lethal, and it has taken so many lives. So, I would say that we have to demonstrate discipline. We have to demonstrate common sense and do our part three of our and save our families in our community.

Congresswoman Yvette Clarke stressed that it is “critical that we have another COVID – 19 relief package…” It puts stimulus checks in the hands of people who may not have qualified for previous checks and addresses the need to get vaccines to undocumented people.

The Biden-Harris administration’s start signified hope for immigrants and immigration activists, who long-awaited comprehensive immigration reform. Before the election, current President Biden was seen on various television news programs, speaking strongly in favor of comprehensive immigration reform and verbally acknowledging that immigrants make a valuable contribution to America. Furthermore, the first-ever female Vice-President, Kamala Harris, spoke proudly of her immigrant parents: a Jamaican father and a South Asian mother. Therefore, it was not far-fetched to believe a Biden-Harris administration would mean tremendous respect, humanity, inclusion, and pathways to citizenship for immigrants.

During his first few days in office, President Biden signed executive orders ending the travel ban for Muslims, ending funding for Trump’s border wall between the United States and Mexico, and indicating support for the Deferred Action for Childhood Arrivals program, also known as DACA. However, this was a far cry from the comprehensive immigration reform that immigrants and immigration activists were waiting on. Long-time immigration advocate, Congresswoman Yvette Clarke, expressed dissatisfaction with immigration reform.

“We recognize, a number of us in Washington, D.C., who are leading on the Roadmap to Freedom, that reversing the policies of the last four years is insufficient. It’s just not enough,” stated Clarke. During the exclusive interview, Clarke outlined the ideals of the Roadmap’s to Freedom proposal and indicated that she is working to “…make sure Roadmap to Freedom passes into law.” President Biden has opened the door for positive conversation regarding immigration. Clarke and other legislators are hopeful that they will see changes in the right direction under the Biden-Harris administration.

Congresswoman Clarke stated emphatically, “For the first time in over a decade, Democrats have control over the House, the Senate, and the White House. This is the moment we must use to be as progressive in our immigration policies as we can.”

During Trump’s four years as President, he heightened anti-immigration sentiment and promoted cruel and inhumane immigration policies. Immigrant communities were threatened by U. S Immigration and Customs Enforcement raids and traumatized by painful deportations. Therefore, immigration advocates have reportedly reacted to the proposed Roadmap to Freedom in a positive way. The Roadmap to Freedom “ensures a fair immigration process that establishes a roadmap to citizenship for the 11 million people who are currently undocumented or in-between status. It centers on family unity and promoting and preserving the diversity of our nation.” Congresswoman Clarke stated that “we have to reimagine a 21st-century immigration system in a manner that is humane, just, and fair.”

Among the many components of the Roadmap are:

Clarke expressed that “making sure that the Roadmap to Freedom passes into law” is one of her main priorities. Other priorities for the 9th Congressional district outlined by her include: “the rent moratorium, dealing with the mortgage crises, and making sure people are protected with utilities.” She also reported being focused on climate change, being in support of Medicare for all, and is a “proud co-sponsor of the Green New Deal…” Clarke is also Co-chair of the Energy and Commerce Committee’s Racial Disparities Task Force. Congresswoman Yvette Clarke remains busy fighting to make sure the needs of her community, District 9, are met. “It’s imperative that we address the COVID- 19 crisis head-on. The implications for our health, our livelihood, and in the life of the community can’t be overstated,” stated Clarke.

During this time that Congresswoman Yvette Clarke spoke openly and candidly about her community’s needs and priorities, Caribbean American Weekly could not end this exclusive interview without getting her thoughts on the insurrection.

On Wednesday, January 6, 2021, America and the world witnessed domestic terrorism on the Capitol, incited by a sitting president, Donald Trump, who has since left office. Some are thinking. Let it be. Clarke, who voted for Trump’s impeachment, gives a powerful message on the significance of impeaching Donald Trump.

She stated, “My vision of our democracy is one that is inclusive and supports and elevates the voices of all people of color. We are Americans, and the American voice is meaningless if it doesn’t represent the country’s diverse experiences of the country we live in and love. And my vision of democracy is one that respects and honors the voting process. Without that, our democracy goes in a downward spiral to authoritarianism. So, we have to restore Americans’ faith in our democracy and national security. There is no act of terrorism by white-wing, white supremacists that should stop the evolution of our democracy. What we saw on January 6 was a convulsive and violent reaction to the reality of what democracy in America looks like and what it means. And this act of domestic terrorism was promoted, instigated, and advanced by the man in the White House, Donald Trump.

Many of us know had this been a demonstration facilitated by black or brown people, by Black Lives Matter, they would have been met by an unprecedented amount of deadly force. But these folks presumably, because they were white and supported by the White House’s deranged occupant, were and facilitated in their insurrection, and that cannot be tolerated. Some say, “Let it be.” What do we say when the next insurrection occurs? And more lives were taken? We have five people who died on January 6. What do we say when the next authoritarian president is elected or installed in place? That then takes us down this road of cruelty and injustice once again. If we don’t set this example now, we are setting a very bad precedent for the subvert of our democracy. Not only that, we leave ourselves open to more insurrection. We leave ourselves open to the possibility that Donald Trump could actually run for office again and stoke the fires of hatred, bigotry, and discrimination. Even if he worked to win the seat, his ability to run again will create a climate that would be extremely harmful to our democracy.

So that’s why I voted to impeach Donald Trump. That’s why it’s important that we continue to have his trial in the Senate make it very transparent to the American people so that we value the democracy that we live in, that we understand our role and responsibility as citizens to uphold our democracy and to recognize that democracy and our votes are sacred. As my colleague the late, honorable John Lewis would say, that has been a guiding light, a guiding principle: And while our nation is not perfect, democracy enables us to reach for perfection, to be inclusive through our franchise, in shaping the future for ourselves, our children and our descendants. “

The Congresswoman stressed, “That behavior simply cannot be tolerated.”