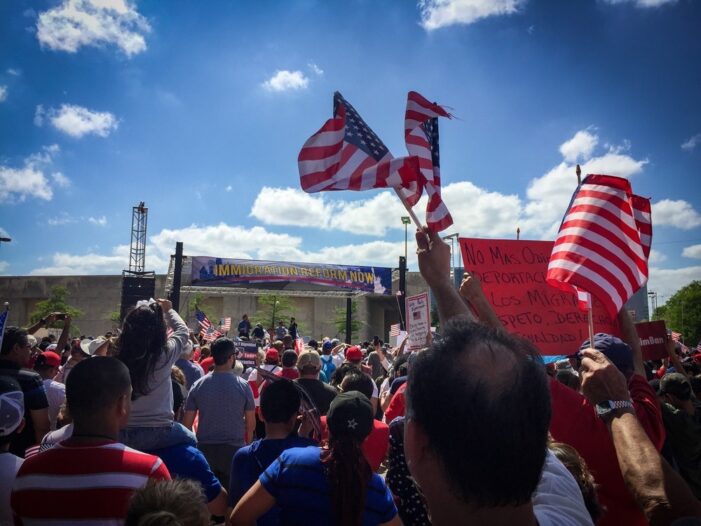 WASHINGTON — Even before the political spectacle of a Republican governor flying migrants to a tiny resort island in Massachusetts, President Biden’s top border officials decided there had to be a better asylum system in America.

Because of new global migration patterns, people are heading toward the southern border of the United States, many fleeing instability, persecution, war, famine and economic distress. The numbers are overwhelming; for the first time, more than two million migrants tried to cross the border in the past year.

Venezuelans, Cubans and Nicaraguans are joining others who are lured by America’s roaring job market and the fact that Mr. Biden has promised not to separate families, build a wall across the border or force asylum seekers to wait in squalid camps in Mexico — all policies embraced by former President Donald J. Trump.

But the question that remains has vexed presidents and lawmakers from both parties for decades.

What do we do with all of these people?

Mr. Biden has no silver bullet to overhaul the immigration system without bipartisan support from Congress, a prospect that no one in Washington expects anytime soon. But after months of debate in the White House, the Biden administration has begun to address a small slice of the problem: the woefully backlogged process to decide who qualifies for asylum, or protection from persecution, in the United States.

The goal is to make the system faster, in part by giving asylum officers — not just immigration judges — the power to decide who can stay and who must be turned away. Migrants will be interviewed 21 to 45 days after they apply for asylum, far faster than the years it can take in the existing immigration court system. A decision on whether the migrant is granted asylum must come quickly — within two to five weeks of the interview.

For now, the changes are tiny; only 99 people since the end of May have completed what are called asylum merits interviews with an asylum officer and been fully evaluated under the new rules. Of those, 24 have been granted asylum, while most of the rest have had their cases sent back to the immigration court system for an appeal.

Officials said that they were moving slowly to test out the procedures and that it would take hundreds of officers — who have yet to be hired — to expand the system.

The new rules will not address the social and economic forces in other countries that are driving migrants to flee. They will not change the overloaded system for dealing with immigrants who do not claim asylum. And the challenge of how to quickly deport those denied asylum will remain.

Still, proponents of the new process say it is a fundamental rethinking of the system after years in which previous administrations focused largely on increasing the number of immigration judges.

“We are building a foundation for a new way of handling asylum claims,” said Alejandro N. Mayorkas, the secretary of homeland security, whose department oversees the immigration system.

In some communities, where jobs are going unfilled, people have welcomed the influx of migrants looking for work.

But Republicans like Gov. Ron DeSantis of Florida and Gov. Greg Abbott of Texas have condemned the large numbers of people arriving into border towns. Mr. DeSantis told reporters this month that he would continue sending migrants to other parts of the United States, saying liberal enclaves like Martha’s Vineyard — where he flew dozens of immigrants — are too far removed from the surge of migrants and their impact on local communities.

He said his solution to the immigration issue amounted to sending migrants “back to Mexico or back to the home country” — a reflection of Mr. Trump’s “build the wall, keep them out” mentality that many Republicans have come to embrace.

After a group of migrants sued Mr. DeSantis, saying they were tricked into boarding the flights, Senator Marco Rubio, Republican of Florida, posted angrily on Twitter: “America is apparently the only nation on earth where you can enter by violating our laws and then a week later sue the government whose laws you violated.”

Asked about the Republican efforts to transport migrants, Mr. Mayorkas was blunt.

“What we are doing is governing,” he said. “They are politicizing and exploiting people for nongoverning purposes.”

But not all immigration rights activists are on board either, saying the administration’s new process moves too quickly.

Eleanor Acer, the director of the refugee protection program at Human Rights First, said migrants needed to be given more time to find lawyers and collect their personal documents.

But she added, “If the process were improved and adequately resourced, it would be a game changer.”

The migrants come over the border from Mexico, risking death by crossing the Rio Grande, only to find a Border Patrol officer and willingly turn themselves in, hoping to win asylum — the right to build a new life in America.

Ramon Colmenares, 30, was one of them. Born in Venezuela, he worked in Peru for about two years before setting out on a dangerous, two-month trek to the United States this summer. In August, he braved the turbulent waters of the river, up to his neck, to reach the U.S. side and request asylum.

“Here I can help my family more than from anywhere else,” he said after being sent to Washington, D.C., in a bus arranged by Governor Abbott. He made his way to New York City, where he has been living in a shelter.

To win asylum, migrants like Mr. Colmenares must prove that being sent home would subject them to persecution based on their “race, religion, nationality, political opinions or membership in a particular social group.” Being poor or wanting a better job is not enough.

Since taking office, Mr. Biden’s administration has confronted a wave of migrants from countries where the coronavirus pandemic decimated economies and livelihoods, such as India, Brazil and Colombia. More recently, crackdowns on political dissent in Cuba, Nicaragua, Russia and elsewhere have compelled people to seek asylum in the United States.

The U.S. asylum system, in theory, should work quickly. Those granted asylum would be given work permits, qualify for safety net benefits and be allowed to eventually apply for a green card and citizenship. Those who are denied asylum and do not qualify to stay in the United States through other programs would be quickly deported.

But that is not how it works. The longstanding asylum process, Mr. Mayorkas said, is “a very broken system.”

Migrants who cross the border between the official ports of entry are detained and given a background check. Some are deported on the basis of a pandemic-era rule put in place by Mr. Trump. For others, the law requires due process before they are sent home. Because there is simply not enough capacity to detain everyone; most of the rest are released into the United States to wait years for a hearing before an immigration judge that will determine their fate. The backlog in the immigration court system has increased to historic proportions, with 1.9 million pending cases, up from about 150,000 in 2001, according to the Transactional Records Access Clearinghouse at Syracuse University, which tracks immigration data. Of those, about 750,000 are asylum cases, most of which have been pending for five years or longer.

Asylum seekers are not allowed to work legally in the United States for about a year while they are pursuing their case. Studies have shown that most asylum seekers appear at their hearings, but some who are denied asylum try to stay, working illegally.

Officials at the Justice Department, which oversees the immigration court, requested $177 million this year to add 100 judges and support staff members. That would increase the number of immigration judges to about 700, according the department, which wrote in its budget request that “the historic backlog is not sustainable and requires additional resources so that justice may be done.”

The latest surge includes Venezuelans who have fled from the government of President Nicolás Maduro, who has been accused by human rights groups of stifling dissent and targeting his opposition. The exodus of nearly seven million people, amid spiraling inflation and an economic collapse, now dwarfs that of Syrians and is on a par with Ukrainians fleeing the war in Europe.

When Mr. Colmenares was offered a ride to Washington, he said he had no idea the bus service was provided by the governor of Texas and gladly accepted.

“I was thinking,” he said, “I was so lucky that I wouldn’t have to spend another night at the border.”

The goal of the new asylum system is speed.

By allowing cases to be decided by an asylum officer, rather than a judge, officials hope to issue decisions within four to six weeks rather than the years it currently takes. (Immigration judges must have a law degree and at least seven years of experience as a lawyer. Asylum officers do not need a law degree but must, among other things, participate in a five-week basic training course.)

Currently, the administration has redirected 140 asylum officers — out of the current total of about 650 working in the agency — to conduct the new asylum merits interviews. In his budget, Mr. Biden has requested funding for a total of 800 asylum officers for the new system and 1,200 additional support staff. Officials said that would allow the government to eventually conduct 150,000 interviews each year.

The money to ramp up the system would not necessarily need congressional approval, but U.S. Citizenship and Immigration Services would most likely have to raise fees on things like visa applications to hire more asylum officers.

Mr. Mayorkas said the new system was working as expected, with cases moving quickly. Eventually, he said, that could reduce the incentive for migrants to trek to the border in the first place, because they would know their case would be decided swiftly.

Mr. Mayorkas said the percentage of people being granted asylum in the new system — about a quarter of the 99 cases — was similar to the percentage from the older, slower system, which suggests that applicants were not being disadvantaged by the speed of the process.

Fifty-two migrants who were not granted asylum under the new rules have been returned to the immigration court system for an expedited hearing before a judge. Most are likely to be ordered removed by an immigration judge and deported by Immigration and Customs Enforcement, officials said.

“It’s at an early stage, but all indications are that it is having a very significant positive impact,” Mr. Mayorkas said, “both in the delivery of speed and in providing the due process rights that we have assured the community.”

Karen Musalo, the director of the Center for Gender and Refugee Studies at the Hastings College of the Law, part of the University of California, praised the Biden administration’s efforts to find a more efficient way to quickly process asylum claims.

But she said it was not clear that migrants were being given due process or the time in the new system to properly make their cases.

“Almost every attorney I know who represents asylum seekers, myself included, believes that the trade-offs in the regulation, in terms of the accelerated deadlines for every part of the process, is too high a price to pay,” Ms. Musalo said.

Conservatives have also vowed to continue fighting the new rules in the courts, calling the new rule little more than an effort to allow more migrants into the country.

Stephen Miller, the architect of Mr. Trump’s assault on immigration, said that the real goal of the new rules was to “mass relocate criminal trespassers throughout the country,” adding that “the only solution in the world to the problem of illegal immigration is deportation. Full stop.”