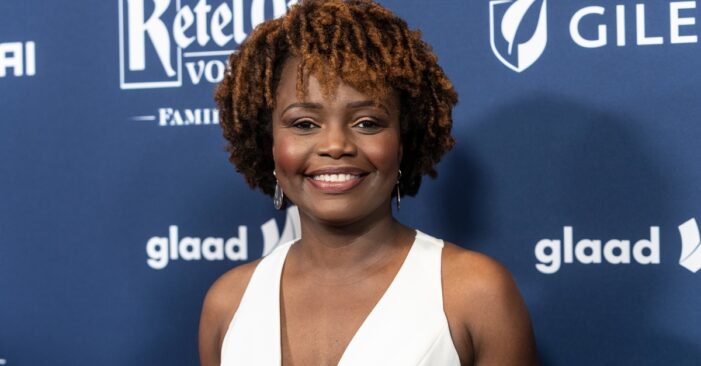 By The Daily Digest

A fresh new face
On Monday, May 16, the world met Karine Jean-Pierre, the White House’s new Press Secretary. This black, lesbian graduate from Columbia, who is replacing Jen Psaki, might provide a new, fresh face to the Biden Administration, but it won’t be an easy position to hold.

Black, gay and immigrant
“I am a Black, gay, immigrant woman”, said Jean-Pierre during her debut, born in Martinique to Haitian parents and raised in New York. “The first of all three of those to hold this position. I would not be here today if it were not for generations of barrier-breaking people before me. I stand on their shoulders”.

From baby formula to Ukraine
The Guardian reports that during her 64-minute debut, the new White House Press Secretary addressed several subjects, ranging from baby formula to the war in Ukraine. Many of the issues that the Biden administration is currently facing.

Victims of white supremacy
More poignantly, the first black person to hold the position of White House Press Secretary read off the list of the people that had passed away in Buffalo, NY on May 15. Victims of an assault carried by a white supremacist.

From the middle of a forgotten spot In the Caribbean
Karine Jean-Pierre was born in Martinique, a French island in the West Indies, to Haitian parents in 1977. The family relocated to New York City when she was 5.

Love and sacrifice
The family lived in Queens, where Jean-Pierre’s dad worked as a taxi driver and her mom was a health care aide. Young Karine often took care of her younger siblings due to her parents’ work.

Getting into politics
Jean-Pierre got a B.S. from the New York Institute of Technology in 1997. Six years later, she obtained a Master’s Degree in Public Affairs from Columbia University. At this moment, the future White House Press Secretary decides to pursue politics.

Thanks, Obama!
The Martinique-born politician and activist worked her way up within the Democratic Party. She worked in the Barack Obama presidential campaign in 2008 as the southeast regional political director.

At The White House
During the first term of Barack Obama, Jean-Pierre was part of the White House Office of Political Affairs as regional political director.

Obama Pride
“President Obama didn’t hire LGBT staffers, he hired experienced individuals who happen to be LGBT”, she told The Advocate IN 2011. “Serving and working for President Obama where you can be openly gay has been an amazing honor”.

Back to Columbia
However, her work has not been limited to the government. Jean-Pierre joined the faculty of Columbia University in 2014, where she teaches international and public affairs.

Moving on to MoveOn
And in 2016, she became a senior advisor for the progressive policy advocacy group MoveOn. A press release by the organization stated that she would “serve as a spokesperson around MoveOn’s electoral work, including a major effort to stand up to Donald Trump”.

As seen on TV
Jean-Pierre also became in 2019 in political analyst for NBC and MSNBC.

Two moms
Despite all of this, the White House Press Secretary has not neglected her personal life. She has a daughter with her partner, CNN correspondent Suzanne Malveaux. Here the couple can be seen in a 2015 event.

The Biden Administration
Jean-Pierre worked as a senior advisor during the 2020 Democratic Presidential Campaign and was named Deputy White House Press Secretary of the Biden administration, second to Jen Psaki.

Psaki bombs
Psaki was a divisive figure, well-known for her “Psaki bombs”. Love it or hate it, she left a big impression that will be hard to fill.

Not free from controversy
Psaki’s successor also has had a few controversies of her own in the past. According to The New York Post, old tweets of her resurfaced, claiming that the 2018 Georgia Governor Election was stolen by the Republic Party and that Donald Trump was “an illegitimate president”.

Time will tell
Only time will tell what will be the impression of Karine Jean-Pierre was White House Press Secretary.