The Board of Elections withdrew the first ranked choice voting tabulation of the crucial primary contest after more than 140,000 extra ballots invaded the count. The now discredited results showed Kathryn Garcia getting closer to Eric Adams with 124,000 absentee votes yet to be tallied. 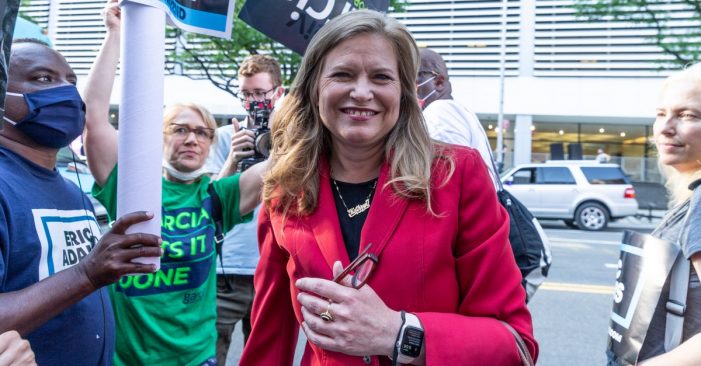 By Samantha Maldonado and Josefa Velasquez, THE CITY

The Board of Elections on Tuesday night yanked the preliminary results of the city’s Democratic mayoral primary election just five hours after releasing them — plunging the new ranked choice voting system and crucial race into disarray.

The BOE, as scheduled, posted an unofficial ranked-choice tabulation of in-person ballots cast on Primary Day and from early voting that showed Eric Adams’ lead in the crowded mayoral race potentially narrowing — with former sanitation commissioner Kathryn Garcia trailing by nearly 16,000 votes with 124,000 absentee ballots yet to be counted.

The board had released a tally on June 22 based on the number of voters who’d ranked each candidate first on their ballots out of five possible slots. It showed Adams comfortably ahead, with Maya Wiley and Garcia running behind him.

But Tuesday’s release — intended to offer a fuller picture of how New Yorkers voted — contained over 140,000 ballots more than the previous count, setting off questions about the accuracy of the board’s tally and the new ranked voting system. Within a few hours, BOE had scrubbed the preliminary tabulations entirely from its website.

The Board of Elections attributed the discrepancy between the two sets of preliminary, incomplete results as a technical error caused by a test run of the ranking system not being cleared from its computing system before the latest tabulations in the 13-candidate race.

“The cast vote record will be re-generated and the RCV rounds will be re-tabulated,” the BOE said in a statement Tuesday night. “The Board apologizes for the error and has taken immediate measures to ensure the most accurate up to date results are reported.”

Under the new ranked choice voting system, New Yorkers got to pick up to five candidates in order of preference on their ballots. For each round, the candidate with the fewest first-ranked voters is eliminated and ballots cast for that candidate trickle down to the voter’s second-place choice. That process is repeated until two candidates remain and one accumulates the majority of votes.

Official results in the mayoral race and contests ranging from city comptroller to City Council aren’t expected to be finalized until at least mid-July.

“Today’s mistake by the Board of Elections was unfortunate,” Adams said in a statement Tuesday night. “It is critical that New Yorkers are confident in their electoral system, especially as we rank votes in a citywide election for the first time. We appreciate the Board’s transparency and acknowledgment of their error. We look forward to the release of an accurate, updated simulation, and the timely conclusion of this critical process.”

Tuesday’s ranked results showed 142,005 more votes in the first round than in the primary night results the BOE released last week — an error flagged by at least one candidate and observers on social media hours before the board acknowledged it and responded.

The City Council’s Black, Latino, and Asian Caucus caucus, whose two leading members led a charge last year to delay ranked-choice voting, said in a statement that the BOE failed to produce “timely and accurate results.”

The caucus announced plans to hold a hearing “to scrutinize the city’s performance in every facet of its charter-mandated implementation of ranked choice voting.”

“Our members warned the public for months that the city was ill-prepared to execute elections under the new ranked-choice voting system and the concerns they raised continue to be borne out by facts,” the group said.

“Today, we have once again seen the mismanagement that has resulted in a lack of confidence in results, not because there is a flaw in our election laws, but because those who implement it have failed too many times,” Wiley said, citing, patronage complaints that have plagued the BOE as well as its mishandling of “tens of thousands of mail in ballots” during last summer’s primary.

She added, “Every ranked choice and absentee vote must be counted accurately so that all New Yorkers have faith in our democracy and our government.”

The BOE said it will re-run the tabulation Wednesday, once again with only votes cast in person.

Still to come is a full city Board of Elections tally that includes absentee ballots as well as those cast during early voting or on June 22.

Once absentee ballots are in, the Board of Elections will redo the ranked-choice count, which involves multiple rounds of eliminations — meaning the results likely will change again.

The preliminary count is just one step in a weeks-long process to determine a winner of the June 22 primary, New York’s first citywide use of the ranked choice voting system. Given the overwhelming Democratic enrollment in the five boroughs, the winner of the primary is likely to become the next mayor — but voters won’t know who that might be until mid-July at the earliest.

Foiled Lawsuit
It’s not the first time Adams has questioned the new voting process. He previously expressed skepticism with the system, and several of his allies and surrogates sued last winter in a bid to block ranked choice voting from taking effect this year. A judge dismissed the lawsuit.

Unlike many of her competitors in the Democratic race, Garcia was the only hopeful who campaigned to be voters’ second- or third-choice pick — a strategy that may pay dividends as more votes are counted.

Garcia and entrepreneur Andrew Yang formed an alliance at the tail end of the campaign — a common tactic in ranked choice contests as candidates hope to notch second- and third-place votes from their opponents. Adams and his surrogates claimed the Garcia-Yang pact disenfranchised Black voters.

Adams emerged as the early leader in the primary last Tuesday, securing the most first-place rankings of any contender — nearly 32%, versus 22% for Wiley and 19% for Garcia. Roughly one-third of in-person Democratic primary voters ranked the former cop and state senator as their top choice, but he didn’t get the more than 50% of first-place votes needed to avoid a run-off under the ranked choice voting system.

For each round, candidates with the fewest first-ranked votes are eliminated and their votes then go to their supporters’ second-place choices, until two candidates remain and one accumulates the majority of votes.

‘Faith in Our Democracy’
The race for mayor isn’t the only one in play: New Yorkers ranked candidates in races for comptroller, public advocate and borough presidents — plus for 51 City Council seats throughout the boroughs, 35 of them open. While certain races have been called, such as for Jumaane Williams, who received 70% of initial first-place votes in the public advocate race, others remain in states of indecision.

So while Adams took a victory lap around town last week, Wiley and Garcia have emphasized the race is far from called — and either still has a chance of gaining traction.

“I said on election night, we must allow the democratic process to continue and count every vote so that New Yorkers have faith in our democracy and government. And we must all support its results,” Wiley said in a statement Tuesday.

That means official, complete results that include every ballot cast won’t be available until the week of July 12 at the earliest.

If Garcia or Wiley clinches the nomination, either is likely to become the first female mayor of the city. Adams or Wiley would become the second Black mayor in the city’s history, after David Dinkins, who won the 1989 election.