Call for Biden’s Immediate Intervention in Mass Deportation of Haitians 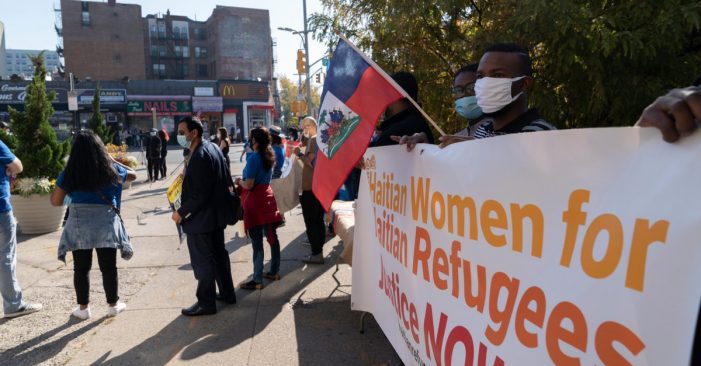 Members of Haitian women for Haitian refugees organization rally for the restoration of TPS and permanent status for refugees from Haiti on Ocean Avenue. – New York, NY – November 8, 2020 (Shutterstock)

NEW YORK, United States (CMC) — Two immigration advocacy groups in the United States are calling on newly-elected President Joe Biden to intervene immediately in stopping what they described as the mass deportation of Haitians.

The New York Immigration Coalition (NYIC), an umbrella policy and advocacy organisation for more than 200 groups in New York state, and the Brooklyn, New York-based Haitian Women for Haitian Refugees said on Thursday that, since February 1, the US Immigration and Customs Enforcement (ICE) agency has deported roughly 300 Haitians.

The group said “another shameful 1,800 deportations” are expected in the next two weeks.

“ICE’s aggressive approach is in line with the Trump-era policy of targeting black migrants,” said the groups in a statement, demanding “the immediate intervention from the Biden White House”.

“After all, this is the same agency that recklessly opened fire on a Brooklyn street and snatched up immigrant New Yorkers outside courthouses schools and off the street,” they added. “Taking their cue from Trump’s contempt for black and immigrant communities, this week’s actions prove that ICE is thumbing its nose at President Biden’s executive orders and directives by continuing its mass deportation agenda.

“But the Trump-era is over, and the Biden administration must rein in this rogue agency,” Awawdeh and Rajkishun continued. “As the organization representing the state with one of the oldest and largest Haitian communities in the country, the New York Immigration Coalition demands that President Biden immediately end these deportation flights to keep New York families together, especially during a public health crisis.

“In the same week that President Biden signed an executive order to launch a task force to reunite families separated by the Trump Administration, this White House is deporting Haitians, including children and infants in record numbers. This is a cruel contradiction that will further separate many families.

“It is simply careless and inhumane to deport individuals to Haiti, knowingly putting innocent people who have migrated to survive in harm’s way,” Raoul added.

“These deportations are wrongheaded, and current plans to deport 1,800 more Haitians to Haiti in the next two weeks must be stopped now.”

The reported mass deportation comes as a major Haitian immigration advocacy group in Miami in mid-December wholeheartedly welcomed the United States’ extension of Temporary Protected Status (TPS) for nationals from Haiti until October 4, 2021.

The US Department of Homeland Security (DHS) announced in December that it was also extending TPS, until the same time, for beneficiaries from El Salvador, Honduras, Nepal, Nicaragua and Sudan.

“This is wonderful news!” exclaimed Marleine Bastien, the Haitian-born executive director of Family Action Network Movement (FANM). “Folks have been frantic and restless worrying about the January deadline.

“TPS holders and their families can rest easier after months of anguish,” she added.

But Bastien said that while her organisation and Haitian TPS beneficiaries were relieved by the US Government’s decision, “TPS recipients need permanent and not temporary protection.

“FANM will continue to organise our members and fight for those in the (US) Senate to pass The Dream and Promise Act,” she said. “We will not stop until we have a path to permanent residency for all TPS holders.

“We urge the Senate to act promptly to find a permanent solution for all TPS recipients and their families,” Bastien added.

Through the notice in the Federal Register, the daily Journal of the United States Government, DHS said it was taking actions “to ensure its continued compliance with the preliminary injunction orders” of a number of US district courts.

The US District Court for the Northern District of California has issued an order to stay proceedings for the termination of TPS in Bhattarai vs Nielsen.

DHS noted that a panel of the US Court of Appeals for the Ninth Circuit vacated the injunction in Ramos on September 14, 2020.

However, because the appellate court has not issued its directive to the district court to make that ruling effective, DHS said “the injunction remains in place at this time.”

DHS said beneficiaries under the TPS designation for Haiti will retain their TPS while either of the preliminary injunctions in Ramos or Saget remain in effect, “provided that an alien’s (immigrant) TPS is not withdrawn because of individual ineligibility.”

DHS said its notice “further provides information on the automatic extension of the validity of TPS-related Employment Authorization Documents (EADs); Notices of Action (Forms I-797); and Arrival/Departure Records (Forms I-94), (collectively ‘TPS-related documentation’) for those beneficiaries under the TPS designations for El Salvador, Haiti, Nicaragua, Sudan, Honduras and Nepal.

“DHS is automatically extending the validity of TPS-related documentation for beneficiaries under the TPS designations for El Salvador, Haiti, Nicaragua, Sudan, Honduras and Nepal for nine months through October 4, 2021, from the current expiration date of January 4, 2021,” it added.

DHS said the US Court of Appeals for the Ninth Circuit vacated the district court’s preliminary injunction in Ramos on September 14, 2020, holding that the decision to designate, extend or terminate TPS is not subject to judicial review.

However, DHS said the appellate order is not currently effective because the Ninth Circuit has not issued any directive to carry out the order to the federal district court. Therefore, DHS said the Ramos preliminary injunction remains in effect.

It said that the Saget district court’s order prohibiting the termination of TPS for Haiti also remains in effect while the decision is on appeal to the US Court of Appeals for the Second Circuit.

“Affected TPS beneficiaries from the six countries will retain their status, provided they continue to meet all the individual requirements for TPS eligibility,” DHS said.

The Haitian Women for Haitian Refgees’s Temporary Protected Status Committee told the Caribbean Media Corporation (CMC) that it was collaborating with the Haitian National TPS Alliance in holding Biden to his promise of reversing Trump’s immigration policies.

“Joe Biden and Kamala Harris campaigned on a promise that, in the first 100 days of the Biden-Harris Administration, they would reverse Trump’s discriminatory policies on immigration, including protecting TPS holders and DACA (Deferred Action for Childhood Arrivals) recipients, ending family separation and restoring asylum laws,” Ninaj Raoul, chair of the Haitian Women for Haitian Refugees, told CMC.

“Now, we will go to Washington to fight for a permanent solution — permanent residency for all 400,000 TPS holders,” she added. “In January 2021, we are going to pressure the White House to demand that if they truly reject racism and the nationalist acts of the past administration, they must favour our community and approve a permanent residency now.

“We will continue to fight to approve permanent residency for more than 400,000 TPS recipients within the first 100 days of the next administration,” Raoul continued. “Once we do, we don’t expect to go home.

“We will remove the fragments of damage left behind by this (Trump’s) Administration,” she said. “We must keep fighting until this country recognises the humanity of all immigrants.”

In response, several lawsuits have been filed in US district courts.

“The basis of most of the lawsuits is that the decisions to end TPS was rooted in racial discrimination, violating required Immigration and Nationality Act (INA) and Administrative Procedures Act (APA) procedures, and infringed on the constitutional rights of TPS beneficiaries,” Raoul said.

She said that one lawsuit, Saget v Trump, for instance, filed in the US District Court for the Eastern District of New York in Brooklyn, challenges the Trump administration’s decision to terminate TPS for Haitians.

Raoul said that the US National Association for the Advancement of Colored People (NAACP), the country’s largest and oldest civil rights organization, also filed a lawsuit against the US Department of Homeland Security (DHS) on behalf of Haitian TPS holders.

In addition, Raoul said members of the National TPS Alliance have “organised around” Ramos et al v Nielsen, a class action lawsuit filed by nine TPS recipients and five US citizen children of TPS holders against the DHS in the US District Court in the Northern District of California.

“TPS holders have been able to stay in status after Trump terminated TPS because of these class action litigation efforts,” Raoul said. “Meanwhile, the National TPS Alliance and all the participating organisations, and its committees and member organisations, including Haitian Women for Haitian Refugees, work collectively to self-advocate for a permanent solution, permanent residency for all TPS holders.”

New York boasts of the second-largest concentration of Haitians with TPS status in the United States, with Florida having the largest.