The agency cites link to a small number of Guillain-Barré cases after vaccination but says the shot’s benefits outweigh the risk. 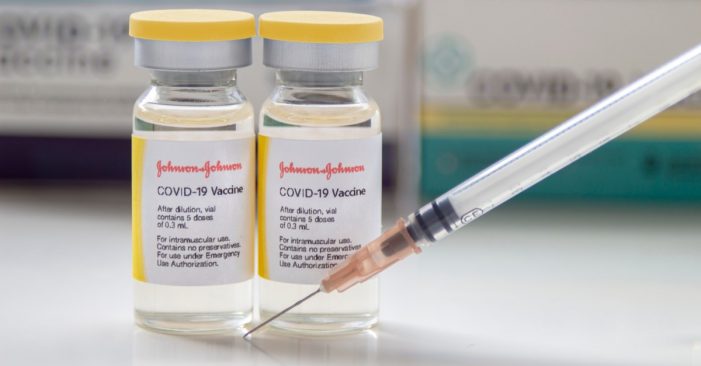 The Food and Drug Administration announced a new warning for the Johnson & Johnson coronavirus vaccine Monday, saying the shot has been linked to a serious but rare side effect called Guillain-Barré syndrome, in which the immune system attacks the nerves.

About 100 preliminary reports of Guillain-Barré have been detected in vaccine recipients after the administration of 12.8 million doses of Johnson & Johnson vaccine in the United States, according to a companion statement from the Centers for Disease Control and Prevention, which monitors vaccine safety systems with the FDA. Of these reports, 95 were serious and required hospitalization, the FDA statement said. There was one death. Neither agency provided details about the death.

The cases have largely been reported about two weeks after vaccination and mostly in men, many aged 50 and older, according to the CDC. Most people fully recover from Guillain-Barré.

The warning on the Johnson & Johnson vaccine will be the latest blow to a shot that had been eagerly anticipated because of its ease of use — it requires only a single dose, which makes it especially helpful in immunizing harder-to-reach populations and regions. But the vaccine has been plagued by problems, including massive stumbles at its U.S. manufacturing plant.

The latest development comes at an especially fraught moment, as the highly transmissible delta variant sweeps the country and fuels an increase in coronavirus cases in many states. And the new warning could complicate Biden administration efforts to ramp up inoculations in areas where skepticism regarding coronavirus vaccines remains high and the vaccine rate is low.

Available data do not show a pattern suggesting a similar increased risk of Guillain-Barré with the Pfizer-BioNTech and Moderna vaccines. More than 321 million doses of those vaccines — developed with a technology different than what is used to make the Johnson & Johnson vaccine — have been administered in the United States.

The Guillain-Barré cases are expected to be discussed as part of an upcoming meeting of the CDC’s Advisory Committee on Immunization Practices, the agency said.

Although the available evidence suggests an association between the Johnson & Johnson vaccine and increased risk of Guillain-Barré, “it is insufficient to establish a causal relationship,” the FDA said.

Guillain-Barré syndrome usually occurs at a rate of about 60 to 120 cases each week, according to CDC data. While the cause is not fully understood, it often follows infection with a virus, including influenza, or bacteria. Each year in the United States, an estimated 3,000 to 6,000 people develop the illness.

People older than 50 are at greatest risk. About two-thirds of people who develop the syndrome experience symptoms several days or weeks after they have fallen ill with diarrhea or a lung or sinus illness.

Reports of Guillain-Barré in vaccine recipients are rare, the CDC said, “but do likely indicate a small possible risk of this side effect following” the Johnson & Johnson vaccine. Reports of the syndrome were made to an early-warning safety network run by the CDC and FDA, the Vaccine Adverse Events Reporting System. It collects information about possible side effects or health problems after vaccination. The system looks for unusual or unexpected patterns that require a closer look. Anyone can report a reaction or injury.

Experts said the latest news about the Johnson & Johnson shot may complicate vaccination efforts, especially in parts of the country where rates remain under 50 percent.

Jeanne Marrazzo, director of infectious-diseases at the University of Alabama at Birmingham, said the absolute risk of Guillain-Barré remains so rare that “it should not deter people from getting vaccinated,” she wrote in an email. If people are concerned, they can still get a Pfizer or Moderna vaccine with no risk, adding: “This news does not provide an excuse to remain unvaccinated!!!!”

But the expected warning on the Johnson & Johnson shot “quite possibly” will make it harder for health-care providers to persuade people to roll up their sleeves, Marrazzo said.

“When a person is hesitant to get a vaccine, any additional safety signal, even if very rare, just adds to their own database that fuels their reluctance,” Marrazzo wrote.

Paul A. Offit, a pediatrician and director of the Vaccine Education Center at Children’s Hospital of Pennsylvania, said he did not think the latest news will make much difference because the U.S. vaccination effort has “hit a wall.” The Biden administration has already done “as good a job as we could possibly hope for on how to mass produce, mass distribute and mass vaccinate” the country, Offit said.

Now, Offit said, it’s time for the next step: the government needs to compel vaccination. The Supreme Court has already ruled twice that public health authorities can take these measures in face of outbreaks, he said. Without such a step, the virus is “going to continue to mutate, continue to create variants” and result in another surge in late fall and winter, he said.

Just three months ago, federal officials paused use of the Johnson & Johnson vaccine after it was linked to another rare side effect — severe blood clots. That pause was lifted within days after an extensive safety review by the FDA and CDC, and a warning was added to the vaccine’s label.

The vaccine also has been hobbled by production problems at Johnson & Johnson’s subcontractor, Emergent BioSolutions, the only U.S. manufacturer of the vaccine. The Baltimore plant was shut down in April after federal officials discovered millions of doses had been contaminated with Astra Zeneca vaccine, which was also being made there.

Other vaccines also have been associated with rare adverse events. The FDA in late June decided to add a warning to the Pfizer and Moderna coronavirus vaccines about extremely unusual cases of myocarditis — heart inflammation — in some young adults and teens after vaccination. Federal health officials said there was “a likely association,” and that the problem appears most likely to occur in young men after they receive two doses of the vaccine.

The CDC and the Department of Health and Human Services, together with 15 of the country’s leading medical and public health organizations, issued a joint statement in June saying they “strongly encourage everyone 12 and older” to get the Pfizer and Moderna shots because the benefit of vaccination far exceeds potential harm.

In June, the American Neurological Association reported that two studies published in the journal Annals of Neurology had found 11 cases of Guillain-Barré syndrome two to three weeks after vaccination with the AstraZeneca vaccine. The cases, which were from England and India, involved an unusual variant of the disease that caused severe facial weakness, the organization said. An accompanying editorial described a similar case involving a Boston man who received the Johnson & Johnson vaccine.

Vaccine safety officials in Europe have recommended that a warning be added about Guillain-Barré to the AstraZeneca vaccine. But the European safety committee said that while cases have been reported following vaccinations, “at this stage the available data neither confirms nor rules out a possible association with the vaccine.”

The CDC monitors for Guillain-Barré syndrome each flu season. The agency says the data on an association between seasonal influenza vaccine and the illness varied from season to season. When there has been an increased risk, it has consistently been in the range of one or two additional cases per 1 million flu vaccine doses administered. Studies also suggest it is more likely that a person will get Guillain-Barré after getting the flu than after vaccination, according to the CDC.