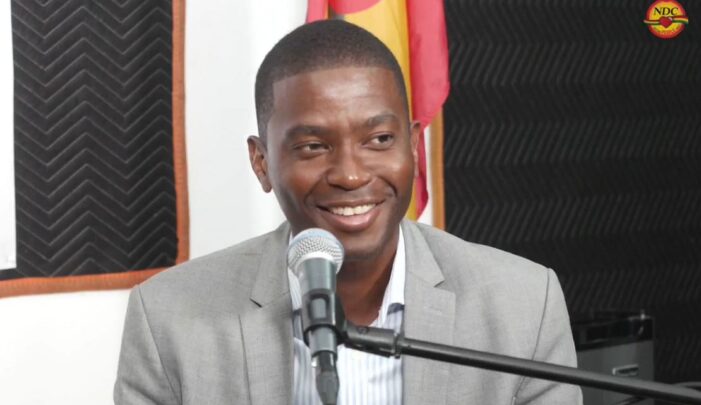 The official swearing-in ceremony which took place at the Kirani James Athletic Stadium, saw the new ministers receiving their instruments of appointment. They include:

Adrian Thomas- Minister of State with responsibility for Agriculture, Fisheries and Cooperatives;

Quinc Britton – Senator in the Parliament of Grenada;

In his address following the ceremony, Prime Minister Mitchell said it was time for industrial peace in Grenada and announced in his capacity as Ministry of Finance that he will instruct the Ministry of Finance to repay to the teachers of Petite Martinique, Carriacou and Grenada, the salaries that were docked unjustly from them and that those payments should be made to them as early as July 2022.

At his swearing in last Friday, Mitchell said that a collective approach would be needed to deal with the many problems confronting Grenada, Carriacou and Petite Martinique.

“I wish to assure the nation that under my leadership, the National Democratic Congress must lead by example by taking a united citizens approach to our governance. It does not mean that we do not have to make tough but difficult decisions and oftentimes that’s the hallmark of leadership,” said Mitchell, who in October took over the reign of the NDC following the party’s disastrous outings in the last two general elections when it was trounced 15-nil.

He told the ceremony that when those decisions are required “we will make them but we will ensure that we can explain, consult and justify to our people why we are making the decisions”.

Mitchell said he was urging Grenadians to be part of the transformation of the country and that while the members of the Cabinet and portfolios will be known soon, such a task will be undertaken on a merit basis.

“We would not move forward as a people,” he said, if appointments to key government institutions, boards and other services were done on a party loyalty basis.

He has vowed to break the cycle of nepotism under his administration and was urging all Grenadians, who in the past had shied away from serving the country to come forward as the “doors are open.