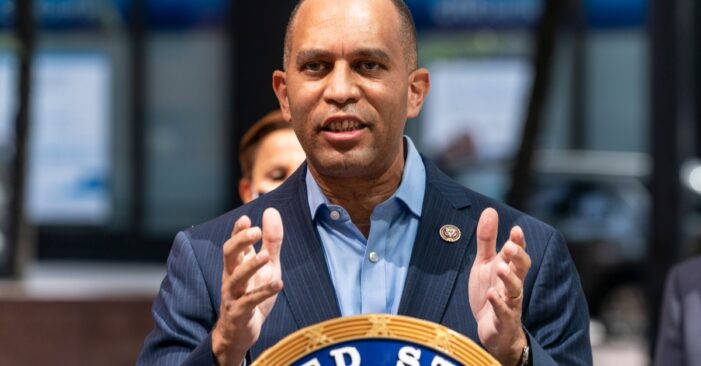 On Monday, May 16, the court appointed, neutral Special Master, Jonathan Cervas, tasked with redrawing New York’s Congressional and state Senate district maps released a draft version of the map for House districts. The draft which will be finalized on Friday, May 20. The redrawing is a death blow for Democrats. Reaction has been swift and hard-hitting.

Under the Special Master’s maps, most notably, two of New York City’s longestserving Democrat members of Congress, Jerry Nadler and Carolyn Maloney, were drawn into Maloney’s 12th district in Manhattan; both Nadler and Maloney, who live on the Upper West and Upper East Sides respectively, indicated they would contest the 12th District primary. An analogous situation is taking place in Brooklyn, where Hakeem Jeffries, a high-ranking Democrat, was drawn into the neighboring district of Congresswoman Yvette Clarke.

Congressman Hakeem Jeffries did not hold back. In a released statement, he said that the new Congressional map gratuitously targets Black representation and would make Jim Crow blush. According to Jeffries: “The draft redistricting map shamelessly targets historic Black representation in NY, and places four Black members of Congress into the same districts. The new map only adds to the gratuitous national pattern targeting districts represented by members of the Congressional Black Caucus. This tactic would make Jim Crow blush… The NYS Constitution requires that the core of existing congressional districts be maintained. So why was the historic Black community of Bedford Stuyvesant — once represented by the legendary Shirley Chisholm — broken into pieces in the proposed map? It’s unacceptable. It’s unconscionable. It’s unconstitutional.”

Congresswoman Yvette Clarke had a strong statement. The following is an excerpt: “As an appointee of Judge Patrick McCalluster of Steuben County, Special Master Jonathan R. Cervas was tasked with drawing new congressional district boundaries in New York State that reflect free and fair election rules, laws, and statutes. The State of New York has been clear about its mission to keep communities of interest together through the redistricting process, and the newly proposed map disregards that objective entirely. Article III, section 5 of the constitution of the State of New York clearly states that ‘districts shall not be drawn to have the purpose of, nor shall they result in, the denial or abridgement of racial or language minority voting rights’ and that ‘maintenance of cores of existing districts […] including communities of interest’ must be considered.”

“Furthermore, it is well known that Bed-Stuy was once divided in the mid1960’s which led to a lawsuit to ensure their voting rights were not denied or abridged to ensure the community had equal opportunity to participate in the political process. The cracking of this district is a regressive action that dismisses precedent for this community. This proposal harkens back to an era in our nation where laws were designed to limit minority representation in our democracy. The practice of “cracking” or diluting the voting power of historically oppressed communities was shameful when carried out by avowed racists in positions of power in previous decades and extremely disappointing when enabled by an out-of-state, unelected consultant today. Whatever the intention, the draft proposal substantially weakens the political power of the minority communities in these areas. The draft New York Congressional maps, if left unchanged, do not protect and preserve communities of interest. I am highly concerned that this map will disenfranchise the power of the constituency of the Ninth Congressional district. I strongly recommend that Special Master Johnathan R. Cervas revisit the draft map and keep these historic communities intact.”