Kyrie Irving turns attention to Israel-Palestine: Basketball ‘not the most important thing to me right now’ 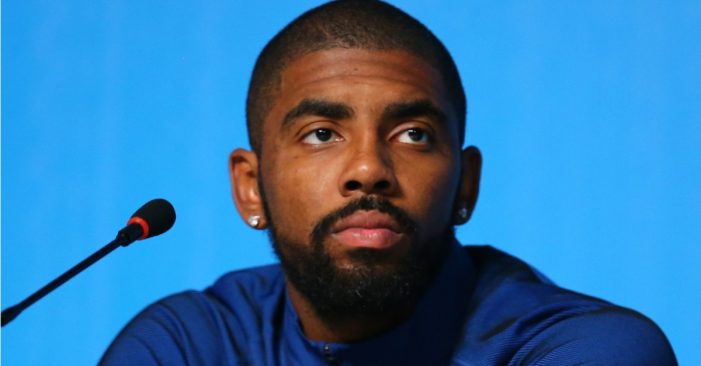 Kyrie Irving turned the focus to the ongoing violence between Israel and Palestine rather than answer any game-related questions Saturday night.

“My goal out here, my purpose, is to help humanity and I can’t sit here and not address that,” Irving said following the Brooklyn Nets’ 105-91 victory over the Chicago Bulls.

Irving spoke of the conflict between the two areas multiple times. The Nets, currently in second place in the East, close their season on Sunday.

Irving was asked about the first game playing with James Harden and Kevin Durant together since Feb. 13. He said it was nice to play they game they loved, but “basketball is just not the most important thing to me right now.”

Kyrie Irving comments on recent events around the world:

“It’s sad to see this s— going on… it’s all over the world, and I feel it… my goal and my purpose is to help humanity, and I can’t sit here and not address that.” pic.twitter.com/dDrpmZPP7F

“There’s a lot of stuff going on overseas,” Irving said. “All my people are still in bondage all across the world and there’s a lot of dehumanization going on, so I apologize if I’m not going to be focused on y’all questions. It’s just too much going on in the world for me just to be talking about basketball.

“I’ve got to focus on this s*** 24/7 most of the time, but it’s just too much going on in this world not to address. It’s sad to see this s***going on. And it’s not just in Palestine, it’s not just in Israel, it’s all over the world, man. I feel it. I’m very compassionate to all races, all cultures, and to see a lot of different people being discriminated upon or being discriminated against based on their religion, color of their skin, what they believe in, it’s just, it’s just sad.”

The violence between Israelis and Palestinians is the worst in years after heavy fighting broke out a week ago. It is the first significant conflict between Israel and Hamas, the militant group that rules the Gaza Strip, in seven years and the first major Palestinian uprising in 16 years, per the New York Times.

Israeli airstrikes on Gaza City killed at least 33 people and demolished three buildings on Sunday in the deadliest single attack since fighting broke out, medics said via the Associated Press.

“I don’t care which way you stand on — either side,” Irving said. “If you’re a human being, then you support the anti-war effort. There’s a lot of people losing their lives — children, a lot of babies, and that’s just what I’m focused on.

“So if you guys want to ask me questions about the game, I really don’t care about it except for everyone leaving the game healthy and being able to go home to their families.”

He added that he’s siding with God and treating everyone with kindness and fairness.

“I’m siding with God: just treat every human being the way you expect to be treated, no matter who they are, what they look like, where they come from. If you truly believe in standing as one, then you will stand with us in fighting against this.” – Kyrie Irving pic.twitter.com/FyKaZSpbOU

The Nets (47-24) finish the regular season against the Cleveland Cavaliers on Sunday and can cinch the No. 2 seed with a win. Irving scored 22 points in Saturday’s game, which was only the third time the Nets’ Big Three were together on the court this season.

The championship game was supposed to be played May 12, she said, but it was postponed because of the fighting. The men’s season ends in June, and some Americans are also there, she said.

I’m ready to get the hell out of here. My patience is wearing thin. 🤬🙄 We have been under attack for days . We aren’t getting any sleep. My city has been struck 3 times by rockets . I AM READY TO GO TF HOME !!!! This is not okay.

She took a video of an airstrike and said it landed five miles from her house. Some of her tweets from the past week are compiled by Girls Talk Sports TV.

Peterson said athletes are being moved north to a safer location while waiting to come back to the U.S. She said the airports are also being targeted, and certain airlines have stopped routes to the country.

The U.S. state department advised Americans to reconsider travel to the area on Thursday.