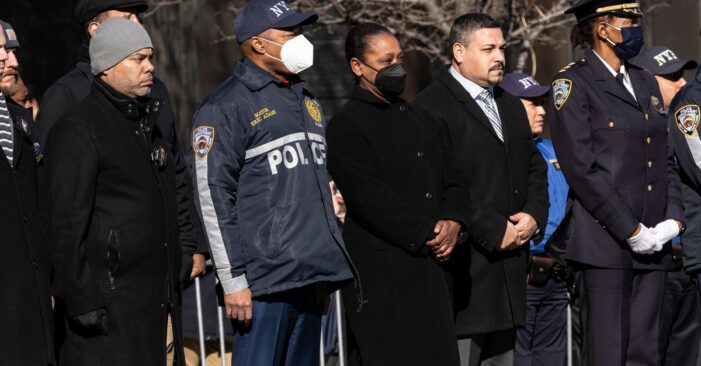 NEW YORK – New York City Mayor Eric Adams today announced two new appointments to fill out his economic development team and deliver on his vision for uplifting and protecting working New Yorkers. Vilda Vera Mayuga will serve as commissioner of the Department of Consumer and Worker Protection (DCWP). As commissioner, Mayuga will deepen the agency’s mission of ensuring there are robust protections in place for city workers and consumers, and that such protections are fairly and equitably applied. Jose Ortiz, Jr. will serve as senior advisor for workforce development. In that role, he will advise Deputy Mayor for Economic and Workforce Development Maria Torres-Springer on strategies for better coordinating the city’s workforce development programs to aid the city’s recovery from COVID-19, and ensure people from underserved communities have access to good-paying jobs.

“As a blue-collar mayor, I am focused on building a team that serves the needs of working New Yorkers throughout the five boroughs,” said Mayor Adams. “From preparing workers for jobs in emerging industries to ensuring dignity and economic justice in the workplace, my administration has an ambitious agenda to ‘Get Stuff Done’ for the hard-working people of this city. Vilda and Jose have been doing this work for a long time, and I am thrilled to have them join our economic development team as we work to build an equitable recovery.”

“The city’s economic recovery depends on our ability to propel multiple sectors of our economy, protect workers and consumers, and connect New Yorkers to family-sustaining jobs,” said Deputy Mayor for Economic and Workforce Development Maria Torres-Springer. “I am therefore thrilled we have incredibly talented and devoted leaders like Vilda Vera Mayuga and Jose Ortiz Jr., who will work every day to ensure our economic and workforce development policies lift up families across the five boroughs and power an inclusive recovery for our city.”

“I am thrilled to join the outstanding team at the Department of Consumer and Worker Protection,” said incoming DCWP Commissioner Vilda Vera Mayuga. “Thank you to Mayor Eric Adams for entrusting me with such an important agency. In New York City, everyone is a consumer, and I am committed to ensuring all have the necessary tools to avoid falling prey to fraud and deceit. Similarly, our workers need our systems to work for their betterment, and we will do that in conjunction with our businesses so we can all be winners in this great city.”

“It has been my honor to serve as an advocate for developing talent in every corner of this great city,” said incoming Senior Advisor for Workforce Development Jose Ortiz, Jr. “I’m thrilled to begin this next chapter as senior advisor for Workforce Development, and thank Mayor Eric Adams and Deputy Mayor Maria Torres-Springer for the opportunity to continue this important work in service to the city.”

“It has been a tremendous privilege to serve my fellow New Yorkers as commissioner of DCWP and inspiring to work alongside the committed team at this agency,” said DCWP Commissioner Peter A. Hatch. “Together we settled the city’s largest paid safe and sick leave law investigation, returning millions in restitution to more than 11,000 home health aides, reached more than one million families with assistance in claiming the Child Tax Credit; added paid leave specifically for caregivers to get their children vaccinated; and provided new protections for more than 65,000 delivery workers, and relief for more than 20,000 hard-hit restaurants and millions of consumers as the first agency in the nation to license and regulate the growing number of third-party food delivery apps. I congratulate incoming Commissioner Mayuga and offer all my support. Under Mayor Adams and Commissioner Mayuga, DCWP will thrive —making New York City more business, consumer, and worker friendly.”

“The Department of Consumer and Worker Protection is a crucial partner in protecting the workers and consumers of our city,” said Theo Oshiro, co-executive director, Make the Road New York. “Our community members depend on DCWP to enforce their workplace rights and to access key resources, like financial literacy counseling and know-your-rights information. As commissioner of DCWP, Vilda Mayuga will be a steadfast partner in protecting the rights of New York City’s workers and consumers; she has the experience, vision, and true connection to the community that is needed for this vital post. We look forward to working with Vilda Mayuga to strive for a city where every New Yorker can thrive.”

“We are thrilled that the mayor is bringing in a tireless advocate and leader with such a strong record on economic justice” said Debra-Ellen Glickstein, executive director, NYC Kids RISE, and former executive director, DCWP’s Office of Financial Empowerment. “We look forward to collaborating to support community wealth building throughout New York City neighborhoods and building on the successful work of the Department of Consumer and Worker Protection.”

“Hispanic Federation congratulates Vilda Vera Mayuga on her appointment as commissioner of the Department of Consumer and Worker Protection. As a Latina who has vast experience across all levels of government, we are proud of this achievement. She has set incredible precedents throughout her career, and we look forward to working with her in her new role,” said Frankie Miranda, president and CEO, Hispanic Federation.

“Understanding the importance of investing in the people who make up the workforce of our great city has always been paramount to Jose Ortiz Jr.,” said Kathleen Culhane, president, Nontraditional Employment for Women, and board chair, New York City Employment & Training Coalition. “We commend the Adams administration for embracing Jose’s expertise and dedication to connecting New Yorkers to the career skills, education, and relationships that can result in thriving communities and a more robust economy. Jose’s four years of leadership and advocacy at the New York City Employment & Training Coalition have resulted in a stronger, more extensive association of professionals united in a shared purpose that elevates working New Yorkers, while tackling persistent challenges through inclusion and innovation. We look forward to continuing to work with Jose and Mayor Adams in pursuit of this critical mission to support our workforce.”

“Jose has deep knowledge of workforce programs, service providers, and needs. He is a perfect choice for this critically important position,” said Kathryn Wylde, president and CEO, Partnership for New York City.

“New York City faces one of the gravest unemployment crises in recent memory,” said Jason Cone, public policy officer, Robin Hood. “It is a crisis that has created tremendous pain for low-income communities throughout the city and it cannot be confronted by government or business alone. Jose Ortiz has been at the forefront of fostering partnerships between government, business, civil society, and philanthropy for his entire career to extend opportunity to New Yorkers and empower them to transform their lives through workforce training and development. Robin Hood was proud to recognize Jose’s vital work as part of its first group of Power Fund leaders, driving change for communities of color. We look forward to continuing to partner with him as he supports and advises Deputy Mayor Torres-Springer in the months and years to come to help get tens of thousands of New Yorkers back to work and on the path to economic opportunity.”

“I’m excited to hear that Joey Ortiz has been named New York City’s senior advisor for Workforce Development,” Steve Choi, executive director, One for Democracy. “Joey brings smarts, innovation, a wealth of private and public-sector relationships and, above all, a passion for lifting up New York City’s workers and businesses to bring greater prosperity for all. Kudos to Mayor Adams for this pick.”

About Vilda Vera Mayuga
Vilda Vera Mayuga is a seasoned public servant across all levels of government. Since July 2018, she has served as deputy secretary for Economic Opportunity at the New York State Department of State. In that capacity, she oversees the Office for New Americans, the Division of Consumer Protection, the Division of Community Services, and the Address Confidentiality Program. Mayuga is also the secretary of State’s designee to the Committee on Open Government.

From 2014 until June 2018, she served as chair of the New York State Industrial Board of Appeals. She was the first Latina to hold the position.

Previously, Mayuga was deputy commissioner for Worker Protection at the New York State Department of Labor, overseeing the divisions of Labor Standards, Safety and Health, and Immigrant Policies and Affairs. She started at the Department of Labor in February 2011 as executive director of the Division of Immigrant Policies and Affairs, where she implemented the agency’s first U-visa certification protocol and expanded the agency’s role and presence in the fight against human trafficking. Under her direction, the Agriculture Labor Program was started to provide services to both agricultural employers and workers. Mayuga also played a critical role in ensuring the agency’s compliance with language access requirements, and worked heavily on the drafting of the statewide policy resulting in Executive Order 26.

Mayuga also served as an assistant attorney general in the Civil Rights Bureau of the Office of the New York Attorney General. There, she managed a diverse caseload of civil rights cases and handled every stage of litigation. Mayuga tried and settled numerous immigration services fraud cases that resulted in multimillion-dollar judgments. As a result, she received the 2009 Special Award for achievement in the Immigration Fraud Initiative.

Before that, Mayuga served as an agency attorney and investigated Equal Employment Opportunity (EEO) complaints within the Fire Department of New York (FDNY). She also conducted on-site inspections of FDNY premises, such as firehouses and EMS stations, to ensure compliance with the FDNY EEO policy. Mayuga also worked in the U.S. Attorney’s Office for the Southern District of New York, where she analyzed, processed, and monitored requests for evidence from foreign countries.

Mayuga will report to Deputy Mayor for Economic and Workforce Development Maria Torres-Springer.

About Jose Ortiz, Jr.
Jose Ortiz, Jr. was appointed chief executive officer of the New York City Employment and Training Coalition (NYCETC), the nation’s largest city-based membership association for the workforce development industry, in February 2018. Immediately prior to joining NYCETC, Ortiz served as the managing director of External Affairs, Partnerships, and Business Development at Pursuit, a Queens-based workforce nonprofit that prepares underserved and underprivileged individuals without college degrees for software development jobs at some of the world’s most innovative companies. Ortiz spent more than a decade at 92Y, a world-class cultural and community center, where he led youth and family programs, leadership initiatives, and conferences, and was a founding member of the Belfer Center for Innovation and Social Impact, which created Giving Tuesday.

Ortiz has served on the board of directors of The Regional Plan Association, SkillUp, and the Human Services Council of New York, in addition to serving on a number of advisory boards. Ortiz has been invited to testify before the United States Congress’ Joint Economic Committee on the subject of “Connecting More People to Work” and has been covered by numerous media outlets, including The Wall Street Journal, The New York Times, and NY1. Ortiz attended Baruch College and Milton Academy.

Ortiz will report to Deputy Mayor for Economic and Workforce Development Maria Torres-Springer.