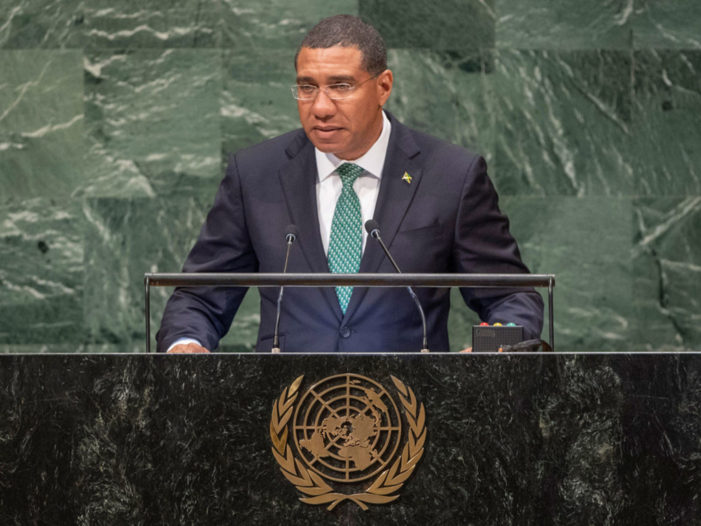 NEW YORK, Jamaica, Queens, May 2, 2022 – Mayor of New York City, Eric Adams, has offered to partner with the government of Jamaica to stem the flow of guns and drugs that continues to create mayhem both in the city of New York and in Jamaica.

“As Mayor of the Great City of New York which is home to almost a million Jamaicans, I am concerned about the flow of guns and ammunition as well as drugs from New York City to Jamaica and the impact that it is having on the country as it relates to loss of life.”

“Some of the guns that are causing deaths in Jamaica, are the same that are manufactured here in the United States and are shipped to Jamaica and the region which are also causing the same deaths in my city.”

He told the over 300 Jamaicans and friends of Jamaica headed by Prime Minister Andrew Holness that ”we will partner with your government Mr. Prime Minister, together, to be responsible for changing the culture of the flow of guns and drugs that is destroying the public safety of both our countries in a real way,” Mayor Adams declared to a thunderous applause.

“Mr. Prime Minister, I am your partner, I am excited that you are visiting my City and I’m excited about the partnership,” the New York Mayor said.

He said it was clear that New York City was what he called the heart and soul of the Jamaican Diaspora in the United States, as it boasted the largest Jamaican population in America.

Mayor Adams spoke of the unbelievable contribution of the Jamaican diaspora to the City, which New York cannot ignore or do without. As Mayor, I want to thank the Jamaicans for their contribution at every level of commerce, public safety, health, innovation and education.

And having the Jamaicans here, is a signal that we are going to strengthen those bonds that exist between us and look at the areas of education, expanding trade and increasing business between the City of New York and Jamaica,” Mayor Adams concluded.

In launching the Jamaica-60 Independence anniversary in New York, Prime Minister Holness called on Jamaicans at home and abroad to come together to make Jamaica the Greatest Country on Earth.

“The Government will be bringing together all our Jamaicans so that we can look at what we have achieved over the past 60 years and to have Jamaicans recommit themselves to make Jamaica advance towards economic independence as we go forward.”

“It is right that as we celebrate 60-years we take stock of ourselves as to how we have administered our affairs and to assess our stewardship,” holness said.

The Prime pointed out that Jamaicans should use the time leading up to the anniversary of its 60th year of independence to reflect on the country’s achievements and shortcomings. However, after the celebrations, as a country we should recommit ourselves to do better and to reignite ourselves to receive our inheritance.

The Official Jamaica-60 launch included a wide array of Jamaican foods, music and cultural displays and the venue, Hyatt Regency Casino grand ballroom was transformed into a Jamaica away from home, with entertainment by Jamaica’s vintage artistes Johnny Osbourne and the Derrick Barnett band.