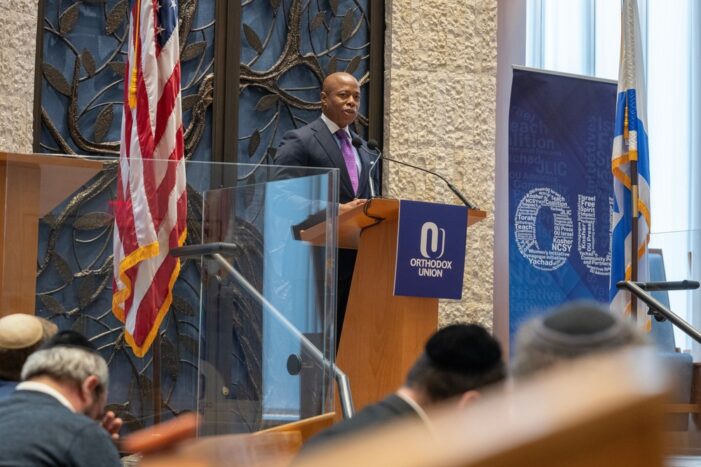 Mayor Eric Adams speaks during meeting with the Orthodox Union on combating antisemitism by elected officials at Lincoln Square Synagogue in New York on December 12, 2022 (Shutterstock)

Every day when I’m out talking to my fellow New Yorkers across the five boroughs, I hear the same things. All of us want a strong economy, safe streets and subways; more affordable housing; support for working families and a great education for our children.

When I took office as your Mayor a year ago, I pledged that we would Get Stuff Done in these areas, and I am proud to report that we have done just that.

The economy is roaring back, with over 150,000 private-sector jobs added between January and October. Subway ridership is higher than it has been in two years. Tourism has recovered to 85% of pre-pandemic levels, supporting jobs across every sector, from hotels to restaurants, bars and shops.

After two years of the COVID pandemic, New York City is back. I can feel the energy everywhere I go, and I can see the difference from when I was on the campaign trail.

Much of this is due to our determination to focus on public safety from Day One. While New York remains the safest big city in America, we know that people need to be safe and to feel safe. That’s why we worked so hard to address crime, disorder, and quality of life issues on every front.

The good news is that crime is down. Major crimes have dropped this November from where they were a year ago; and transit crime is down nearly 13%—due in large part to our surge of NYPD officers in the transit system. We’ve removed nearly 7000 illegal guns from our streets, and gun arrests are at a 27-year high.

At the same time, we are offering alternative pathways to New Yorkers living in areas that are at high risk for gun violence—for example, job opportunities and training with organizations like BlocPower.

Housing our neighbors has never been more important; and I have called for an all-hands-on-deck effort to build half a million new units of housing over the next 10 years. We are already scaling up our efforts on this front, building more affordable housing across the five boroughs, and investing in improving the public housing that already exists.

We are also connecting New Yorkers in need to stable housing, and are taking bold measures to help our brothers and sisters with severe mental illness leave the streets and receive the medical support and services they urgently require.

Our young people have struggled over the past two years. We must make sure that they have the tools to recover from the isolation of the pandemic and to succeed in their careers and lives.

So, we expanded the Summer Youth Employment Program to serve 90,000 young New Yorkers over the past summer. We’ve instituted dyslexia screenings in our schools so that all our students can learn to read fluently; and we extended our services to youth in foster care so we can now support young people ages 21-26, who are facing the challenges of transitioning to independent adult lives.

And we are supporting our working families by increasing the Earned Income Tax Credit for the first time in over 20 years, putting $350 million dollars in the pockets of hardworking New Yorkers who need a break.

A safe city is also a clean and environmentally resilient city. We started the largest-in-the-nation composting program in Queens, which we hope to expand citywide. We are making sure that trash doesn’t collect in neglected areas, like underpasses; and we are limiting the amount of time residential trash can be left out on the sidewalk in an effort to reduce our rat population.

Our city continues to face challenges, but as 2022 draws to a close there is much to be optimistic about. It is an honor to be mayor of the greatest city in world, And I’m proud of what our city has accomplished together. I’m looking forward to working for you and with you to Get Stuff Done for our city in 2023 and beyond.