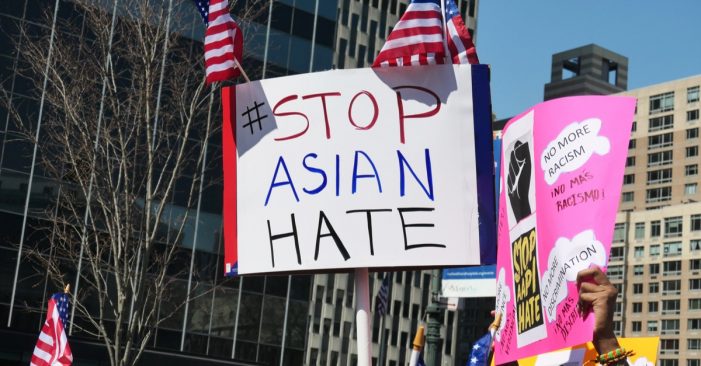 The 33-year-old singer avoided drawing attention to herself by covering her face in a black face mask, a baseball hat, and large, dark sunglasses. She attended the rally with her assistant Tina Truong, who documented the day’s festivities on her Instagram page.

“This is what solidarity looks like! #stopaapihate #stopasianhate #callitahatecrime,” Troung captioned a series of photos and videos, including an image of Rihanna holding up a “Stop Asian Hate” sign and a video of the singer dancing in the street.

Troung also shared a video of one attendee at the rally asking Rihanna for her Instagram handle, apparently unaware that he was talking to the “Umbrella” singer.

“When Rih gives you her IG handle but you think she trolling,” Truong captioned the video. As the stunned man asks, “That’s you?”, Rihanna starts laughing.

Rihanna giving her Instagram handle to protesters at the #StopAsianHate march in NYC. pic.twitter.com/3g4uG7PPs3

Troung attended the rally with a sign that read “Bad day? #Call it a hate crime,” in reference to a Cherokee County Sheriff’s Office spokesman saying that suspected gunman Robert Aaron Long “had a bad day” when he allegedly opened fire last month at three Atlanta-area spas, killing eight people and wounding a man. Six of the people killed were women of Asian descent.

Long, 21, was charged with eight counts of murder and aggravated assault.

Rallies in support of the community have been held across the country including in Atlanta, Pittsburgh, San Antonio, New York City, Chicago, and San Francisco.