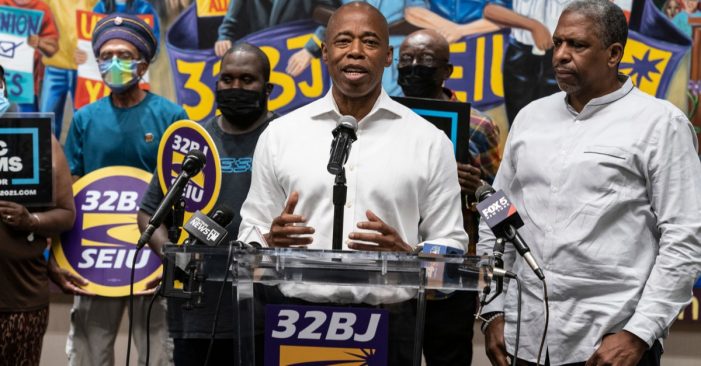 Democratic mayoral candidate Eric Adams declared his opposition to Rep. Alexandria Ocasio-Cortez’s socialist “movement” — which includes defunding the police and shuttering prisons — during a fundraiser co-hosted by a Republican member of the City Council, The Post has learned.

A video recording of Adams’ speech shows him telling supporters that the battle he faced wasn’t with his political rivals in the Nov. 2 election, but with the Democratic Socialists of America.

“They realize that if I’m successful, we’re going to start the process of regaining control of our cities.”

The remarks sparked cheers and applause from attendees at the Monday night event in Douglaston, Queens.

A page on its website — which shows Ocasio-Cortez marching with a raised fist — also says she “inspired up to 10,000 people to join” the nonprofit organization.

Adams’ speech came less than two weeks after a news conference at which he said he wanted to reclaim the mantle of “being progressive” from Democrats who “hijacked” it but “do not have a track record of putting in place real progressive changes.”

Efforts to defund the police — including last year’s $1 billion cut to the NYPD’s budget — have prompted fierce pushback amid surging crime in cities across the country, with former NYPD Commissioner Bill Bratton and co-author Peter Knobler calling it “a hashtag, not a sophisticated policy calculated to boost public safety” in a Post op-ed last month.

“Fewer cops, more criminals? That’s no platform to run on. That’s no city to live in. Defund the police? No, re-fund!” they added.

Meanwhile, a recent report by OpenTheBooks.com found that Democratic mayors and local government officials have been increasing spending on the cops who provide them with personal security at the same time that they’ve cut public safety budgets.

On Monday, Adams — a former state senator and Brooklyn’s outgoing borough president — told donors that he wanted to transcend partisan politics and that he was seeking votes from New Yorkers regardless of party affiliation.

“We’re not going to let parties get in the way of this party called New York City,” he said.

Adams added: “Those of you in the room who are Republicans, tell your Republican friends to vote for Eric Adams. Independents, Democrats, no matter who you are — we are wearing the ‘Team New York’ jersey on this one.”

Adams also pledged to revive the city’s toughness and competitive spirit following the lockdowns forced by the COVID-19 pandemic.

“People have become soft. People don’t even want to go back to work,” he said.

“This is a pivotal moment for us. If we don’t get our act together, China is going to show us how to run our country.”

And he said the city had “surrendered” to crime, mayhem and ineffective government.

“You don’t believe you can go to the Department of Buildings and have a damn permit issued so you can open your restaurant.”

Adams added, to applause, “You don’t believe. But I’ll be damned — you’re going to start believing when I became the mayor of the city.”

Adams apparently misspoke when he said, “There’s a DSA candidate that’s running for mayor,” as the group doesn’t have a ballot line and hasn’t endorsed anyone.

In a statement, Adams campaign spokesman said, “He was talking about the dynamics of the general election.”

Adams also said that he’s been dreaming of leading the city since he was a cop in the 1990s.

“I went to Deputy Mayor Bill Lynch at the time. I said, `I can turn around this city,’” he recalled.

“I knew I put myself on the right path while I wore a bullet-proof vest protecting the children and families of this city. I crafted a plan to become the chief executive.”

Urlich is set to co-host another fundraiser for Adams on Aug. 8 at the Russo’s on the Bay catering hall in Queens.

In an interview, Ulrich predicted that Adams would “be a great mayor” and the most charismatic since the late Mayor Ed Koch, who served three terms, from 1978 to 1989, and was famed for asking New Yorkers, “How’m I doin’?”

“I’ve been a fan of Eric Adams for a long time. He’s going to be a great mayor,” Ulrich said.

Sliwa responded to Adams’ speech by saying. “I’m the candidate who can turn the city around, not Eric Adams.”

“I’m his opponent. He took care of the DSA in the Democratic primary.”

Neither Ocasio-Cortez nor the DSA immediately returned requests for comment but the organization’s New York City chapter retweeted this story and added, “Looking to move? Join NYC-DSA and live in [Eric Adams’] mind rent free.”