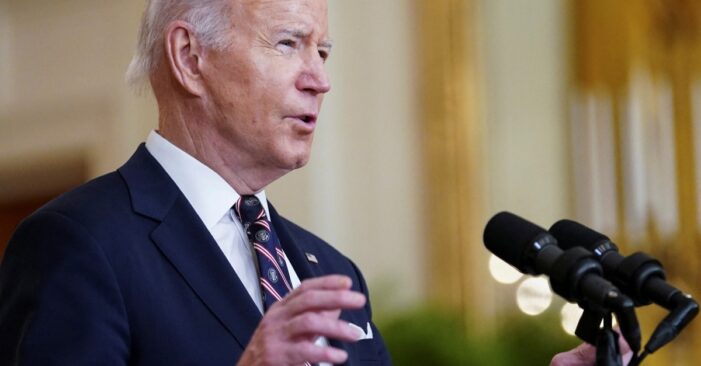 U.S. President Joe Biden provides an update on Russia and Ukraine during remarks in the East Room of the White House in Washington, U.S., February 22, 2022. (Shutterstock)

By Lexi Lonas, The Hill

Leaders in Saudi Arabia and the United Arab Emirates (UAE) declined calls with President Biden as the war in Ukraine intensified, Middle East and U.S. officials told The Wall Street Journal on Tuesday.

“There was some expectation of a phone call, but it didn’t happen,” a U.S. official told the Journal regarding a call between Biden and Saudi Crown Prince Mohammed bin Salman. “It was part of turning on the spigot [of Saudi oil].”

UAE leader Sheikh Mohammed bin Zayed also declined a call from Biden, according to the officials.

Officials told the outlet that U.S. relations with the two Gulf countries have been strained over the Biden administration’s lack of support in the war in Yemen and the revived negotiations concerning the Iran nuclear deal.

Saudi Arabia has also been pushing for legal immunity in the U.S. for Crown Prince Mohammed, who is accused of killing a journalist in 2018.

One U.S. official said they have worked with the two countries to strengthen their defenses amid concerns over Iran, according to the Journal.

The U.S. has been rallying international support for Ukraine as some countries have remained neutral regarding the Russian invasion.

Washington is potentially looking at Iran, Saudi Arabia and Venezuela for oil talks as it cuts off Russian oil imports.

Saudi Arabia and the UAE both said they will not produce more oil than agreed on by the Organization of the Petroleum Exporting Countries, the Journal noted.

The Hill has reached out to the White House for comment.