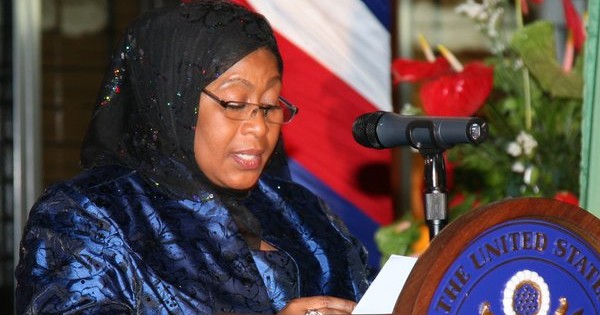 Tanzania — Tanzania’s vice president, 61-year old Samia Suluhu Hassan, was recently sworn in as the country’s president following the sudden death of John Magufuli, making her the first female president in the history of the East African country.

“It’s not a good day for me to talk to you because I have a wound in my heart,” Hassan said in her maiden speech on March 19. “Today I have taken an oath different from the rest that I have taken in my career. Those were taken in happiness. Today I took the highest oath of office in mourning.”

Magufuli died on March 17 at the age of 61 from the heart disease that plagued him for a decade. Prior to that, he hadn’t been seen in public since February 27, sparking rumors that he contracted COVID-19.

Under Tanzania’s constitution, Hassan will serve the remaining years of Magufuli’s second five-year term that will end in 2025.

Hassan, who is born in Zanzibar and a mother of four children, has years of experience in public service. She once became a project manager for the UN’s World Food Programme, took a seat in Zanzibar’s House of Representatives, and served as local government minister for youth employment, women and children and for tourism and trade investment and also became a Minister of State for Union Affairs.

In 2015, Hassan was chosen by Magufuli as his running mate for her passion and intelligence, according to reports. She then became the first female vice president in the country.

Now, analysts say Hassan’s leadership will most likely be tested on her response to the ongoing coronavirus pandemic, which was openly dismissed by Magufuli who urged the citizens not to wear masks and denounced the vaccines as a Western conspiracy.

Hassan, who has been known for her gentleness as opposed to her predecessor, has also shown support to women and girls ever since and inspires them to reach their dreams.

“I may look polite, and do not shout when speaking, but the most important thing is that everyone understands what I say and things get done as I say,” Hassan said in a speech last year.