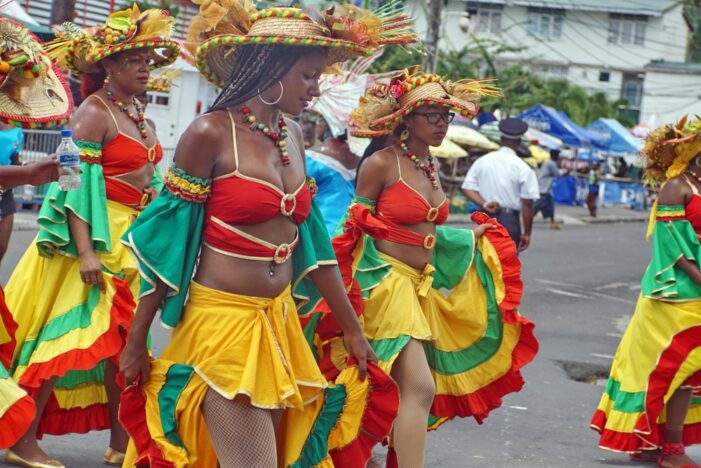 CASTRIES, SAINT LUCIA – CIRCA JULY 2015: Costumed locals in yellow and green in the carnival parade in the capital. (Shutterstock)

The Landings Resort & Spa recently treated guests to its in-house Carnival parade dubbed “Colors in Motion”. Held on Friday, July 22, a couple of days after Saint Lucia Carnival wrapped up, the event drew nearly three dozen guests to the property’s lawn where they joined staffers and were treated to pulsating Soca music, drinks, and dance. The partiers even got a special performance from former Power Soca Monarch, Ezra, who had them sing along and dance to some of his popular hits. Sannicia Sammy, Assistant General Manager, The Landings Resort & Spa, said “Colors in Motion” was birthed by Aunty Cathy and Juan, the Coordinators of the Kids Club. “They created the name, concept, and costumes, and brought the event to life,” Sammy said. Meanwhile, Cathy Andrews, Supervisor for Kids Club, known as Aunty Cathy too, especially the children, said she, too, was excited about the atmosphere that the event created. “We love seeing the children and families together having fun. This is why we are here, to contribute to the creation of memories for our guests.”