The Next Mayor Can End New York’s Maternal Health Emergency 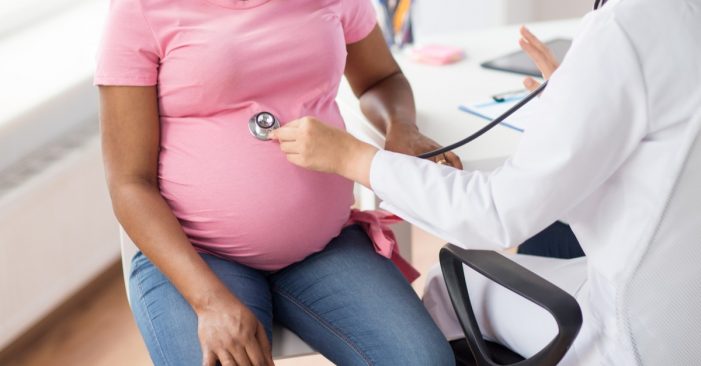 There is a maternal health emergency in New York City. It’s deeply rooted in racism. And it’s one the next mayor can do a lot to stop.

The city and the US as a whole register excessive maternal death and serious maternal morbidity rates compared to other high-income countries. The causes are many. Chief is structural racism and gender oppression. Being Black is the marker. Racism is the killer. It further complicates the already-corrosive effects of a medicalized health system that treats pregnancy as a disease and is systematically inattentive to the needs of expectant and birthing people.

In 2017, Black women gave birth to 23 percent of New York City babies, yet accounted for 55 percent of maternal deaths – continuing the decades-long pattern shown by this bar chart: 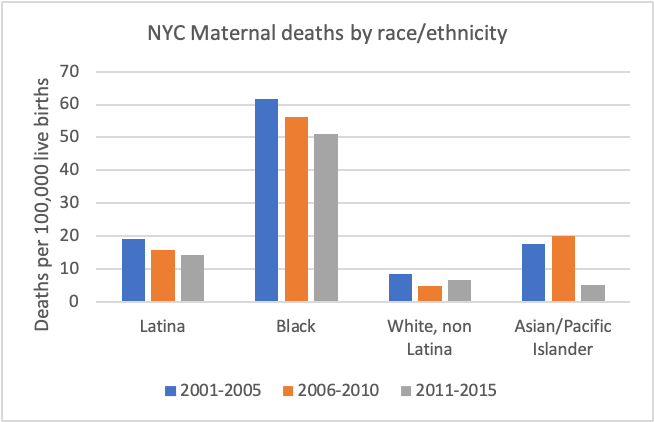 Serious illness resulting from pregnancy and childbirth is also much more common for women of color in New York City. For each maternal death, about 100 women will suffer a life-threatening and often life-altering event during or after childbirth. Examples of severe maternal morbidity (SMM) are heavy bleeding, blood clots, kidney failure, stroke, or heart attack. Black women are three times more likely to experience SMM than white women and Latinx women are twice as likely as white women.

In measuring these outcomes, race matters more than income or social status. Black women living in high-income New York City communities experience SMM at four times the rate of white women who live in very low-income communities. College-educated Black women have higher rates of severe pregnancy-related outcomes than all other women who did not complete high school. 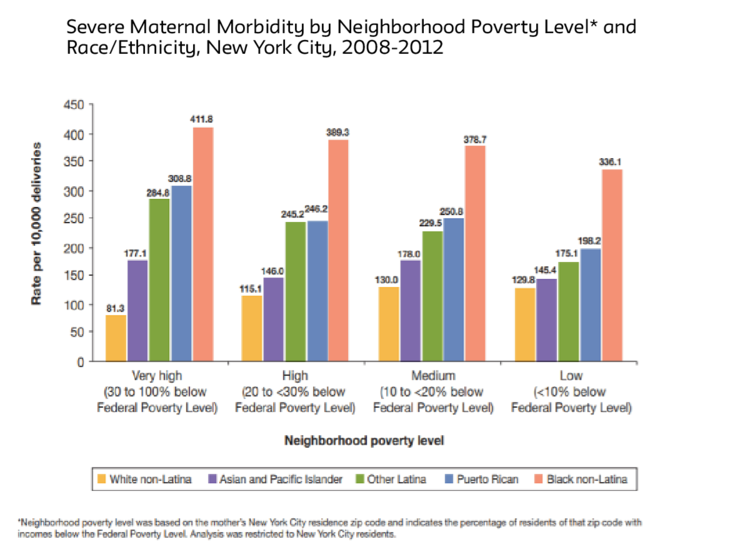 Black, brown, and Asian women contend with the daily injustices of racism and the intentional disinvestment in neighborhoods where they live. These conditions can result in chronic stress and chronic illnesses that increase the risk of pregnancy complications. They are further exacerbated by disrespect for women overall, and particularly for women of color, resulting in women not being listened to and experiencing trauma when seeking health care.

In short: Structural racism undermines the capacity of the health system to support pregnant women and erodes their trust in that system. “If black women delivered at the same hospitals as white women,” one recent study found,” our results suggest that nearly 1,000 black women could avoid a severe morbid event during their delivery hospitalization annually in New York City.”

The next mayor cannot fix the damage a lifetime exposure to racism has wrought. But the next mayor does have the power to initiate major reforms that recognize this reality, combat it, make pregnancy and birth institutions safer, and require the respectful and dignified care that is every woman’s right.

The City’s Department of Health is already implementing pieces of a solution. Since 2017, it has led a clinical and social autopsy of every maternal death while also establishing a network with 14 maternity hospitals to initiate SMM case reviews and develop quality improvement projects. It also funds neighborhood-based Birth Justice Hubs that include Birth Justice Defenders, people who have experienced or are connected to someone who has had a traumatic birth experience, and who organize actions to prevent such outcomes.

The next mayor will have direct authority to encourage and expand this data collection and analysis and neighborhood-based work.

The mayor can also do a lot, to the extent it’s practical and advisable, to de-medicalize pregnancy and birth. The current system treats pregnancy as a condition to be diagnosed and mothers as patients whose care should be managed. But pregnancy is not a disease and most birthing women need support, not treatment.

For the past 20 years, NYC H+H, the city’s public hospital system, where nearly a quarter of all births in the city take place, has maintained integrated midwifery services at three of its 11 maternity hospitals. Building on that, the next mayor should:

These steps would not only improve maternal health; they would also cost far less than the status quo. If one-quarter of the city’s tens of thousands of uncomplicated annual deliveries took place in birth centers rather than hospitals, the system would save an estimated $57 million.

There’s also a long agenda the mayor should work on jointly with the City Council, State and Federal policymakers, and New York’s large and influential non-profit hospital networks. It would include:

Pregnancy and childbirth should be a safe and joyous experience. But as with our Covid-19 pandemic experience, the story of maternal deaths and injuries in our city exposes persistent and stark inequities. Black women suffer the most.

The good news is that making New York the best and safest place to give birth is possible.